Dramatic Demise (or Was it A Dismissal?) of a Bee

On our 60 degree Saturday just past, I visited Blue Heron and was so pleased to see bees flying excitedly in and out of my hive. I saw at least four bees with packed yellow pollen baskets which means there's already a little red maple blooming. It generally starts blooming at the end of January in Atlanta.  The biggest bloom comes later in February, but clearly some is blooming now.  The pollen might also come from mahonia which blooms throughout the winter in Georgia.

At Blue Heron, my hive is alive and seems to be doing well.  Julia's hive appears dead, although on Saturday I saw bees going in and out in the hesitant way that robber bees approach hives and only saw about six bees entering the hive.

At Kevin's hive (he is the main gardener at Blue Heron and is the person who allowed us to keep bees there) I saw bees flying in and out.  At first I thought they were sparse and probably robbers, but then the drama began and I felt sure they are alive in the hive.

During the winter on warmish flying days, bees leave the hive to relieve themselves.  Generally they are not robbing, but with no foraging going on, the bees still are guarding the hive against robbing.  I watched Kevin's hive for a while and saw this interesting drama.

At first I thought the bees were convincing their sister that her earthly life was over and that she, taking up resources of the hive, needed to leave the hive (being placed on the proverbial bee ice floe as it were).  As I watched I began to think that this drama was about a marauding bee who chanced to enter the wrong hive, perhaps in search of food, perhaps in confusion since there's been a lot of non-flying days.

In the photo below the bees have surrounded this bee and are working on convincing her, for whatever reason, to leave. 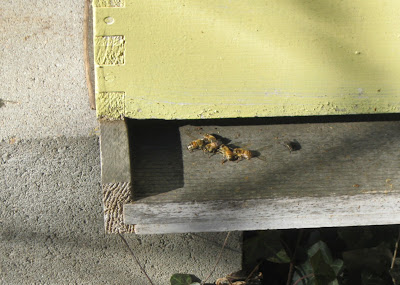 Now they have circled around her, preventing her from choice of movement. 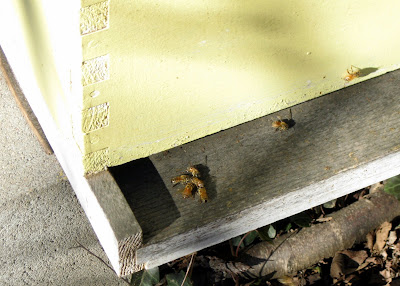 In the photo below, I believe they are biting her with their mandibles. She is on her side, looking rather helpless. 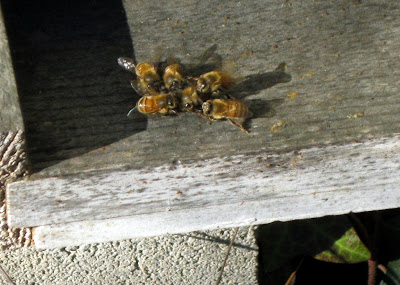 Now they are moving her toward the edge of the landing. 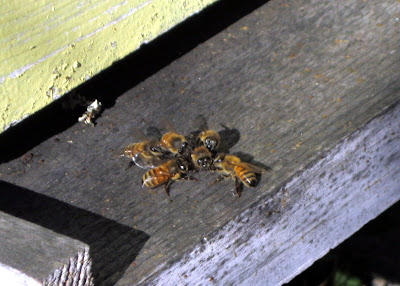 They shove her to the very edge of the landing. 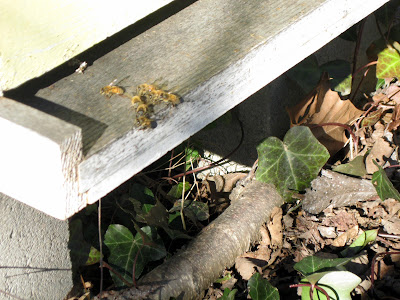 And in this last moment, they send her into the weeds and leaves below. 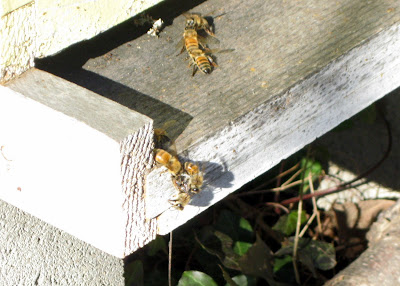 Truly I thought she was dead, but she hesitated in the leaves for a moment and then took wing.  So I decided I was witness to a thwarted robbery attempt or at least winter intrusion into Kevin's beehive.