I love it when Keith Fielder comes to talk to our bee club. He is the 2009 Beekeeper of the Year in Georgia and a Master Beekeeper (there are only 12 Master Beekeepers in Georgia). He is passionate about keeping bees and has strong opinions about what beekeepers need to be up on to be good beekeepers.

His talk was so interesting that I wanted to share his main points with you.

People around Atlanta talk about privet honey as a bad honey, but Keith said that privet makes a good honey in the S Georgia region. This may have to do with temperatures as it affects the privet bloom.

The tulip poplar whose blooming period signifies the nectar flow in Atlanta is found in every county in Georgia and is one of our best nectar providers for the bees. However our nectar flow in Georgia is heralded by the bloom of the red maple. Red maple, which is often found in urban areas, is already starting to bloom in Atlanta. Red maples are often near the tulip poplars. It blooms in late January and definitely in February.

Another important early nectar bearing plant is the dandelion. When he said that, I thought of the many lawns in Atlanta where the goal is to keep the dandelion at bay. A sad thought that the bees are then deprived of dandelion nectar. Luckily my house backs up to woods and this means that there are uncut dandelions behind me. Keith said that the nectar from the dandelion helps with spring build up by providing nectar and pollen as the bees are getting started in the early spring.

Another nectar bearing plant in Georgia is the Canola - it's a rape seed, but the name was changed because of the negative connotations of the word "rape." I didn't know that Canola stood for Canada Oil Low Acid???? While we do grow canola in Georgia, actually 91% of the canola crop is grown in North Dakota. In Georgia, canola blooms in late February or early March and yields a light honey.

Much of the honey in the Atlanta area is informed by both tulip poplar, which generally blooms from April until the end of May, and blackberry which blooms during the same period. Other helpful nectar bearing plants which bloom about the same time are the clovers. White clover is a tremendous source of nectar but the red clover requires a proboscis longer than the bee's and isn't really a source for our bees at all. White clover is another plant that people often hasten to cut out of their yards.

He also talked about holly--which has a light nectar and is great for comb honey; cliftonia (the buckwheat tree), gallberry (a relative of holly). I liked it that he talked about smooth sumac as a source of rich, dark honey. Over Christmas, I saw sumac berries on the trail in Franklin, NC that runs along the Little Tennessee River. 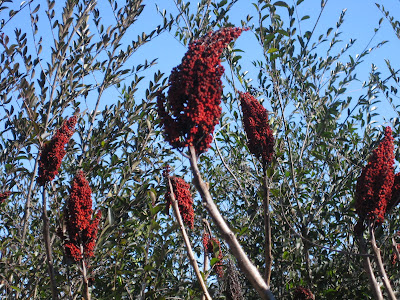 He also covered sourwood, which is in N Georgia in late July at elevations from 1500 - 3000 feet. Made me want to take beehives up to my mountain place which is at that elevation and has sourwood trees all over the three acres.

Cotton honey, which is not a honey I've ever tasted, Keith talked about as one would a fine wine. He said the taste of cotton honey is very complex and that you taste one thing at the beginning and that it "finishes" a different way. His enthusiasm for this honey was remarkable.

Several interesting points he made:
I can't wait to hear him again this weekend when he presents at the Metro Atlanta Beekeepers Short Course at the Botanical Garden in Atlanta.
Email ThisBlogThis!Share to TwitterShare to FacebookShare to Pinterest
at 11:14 PM