The hives were installed on Monday. I inspected them for the first time early Saturday morning. It was a partly cloudy day and the temperature was 62.

The bees housed in the original hive box had not taken much of the sugar syrup, nor had they appeared to empty any more of the syrup can that I had left for them. I did give each of these hives a frame of capped honey so I hoped they were making use of it. 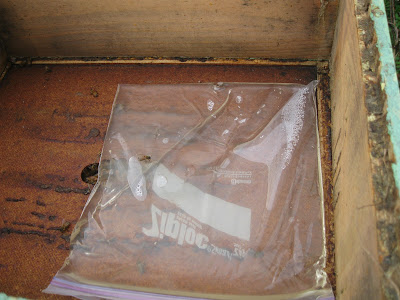 I installed the hives on Monday and overnight we had violent winds, hail and rain in this area of Georgia as well as Atlanta. I didn't know how bad it was in Rabun County so I didn't know how much this may or may not have affected these bees. 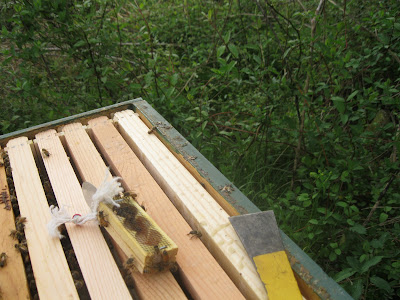 They had released the queen. See the frayed ends of the kitchen twine attached to the queen cage? Bees dislike foreign material in their hives and do their best to figure out a way to carry it out. 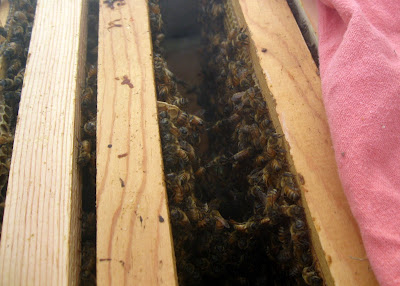 In the box the bees were festooning between the frames where the queen had been. She was between frames 3 and 4 so the hive had built more on that side of the box. I added a frame between these two to make up for the missing frame space that the queen cage had occupied.

The honey frame I had left them was being well used. You can see the scraps of wax on the lower right where they have chewed away the cappings to get to the honey. 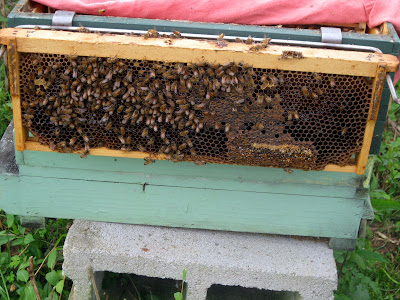 This was a large two pound package and you can see the bees peeking through the frames. 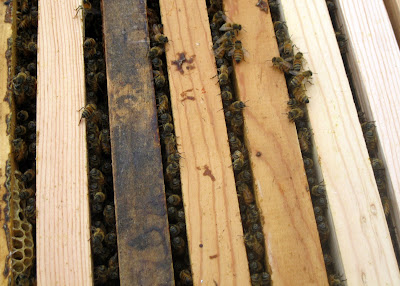 I didn't see the queen or any eggs, but there were so many bees on the occupied frames that I didn't worry. I'm going back next weekend and if I don't see evidence of the queen then, I'll be concerned. 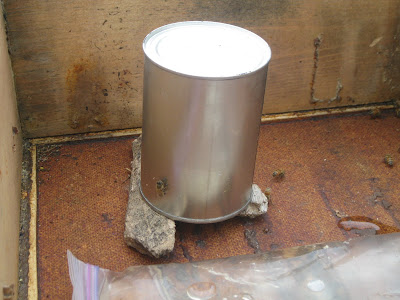 I left the feeding situation a little different than at installation since I was worried that they couldn't get to the ziploc baggie easily enough. I left the inner cover hole partially open to the upstairs section above the inner cover and balanced the syrup can on two rocks.

Next I went to hive #2.  I brought an 8 frame inner cover and top with me to replace the jerry-rigged way I had left it on Monday.  I forgot to take a picture of the closed up hives so you can't see that I left it in better shape, but I did! 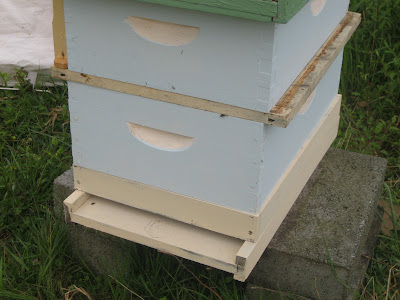 Here's a picture of the frame blocking access from the outside to the inner cover feeding arrangement. 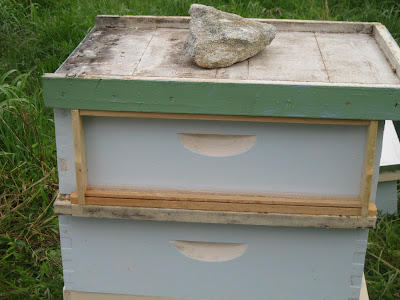 Inside the bees were drawing wax.  Here's one of the beginnings of comb building. 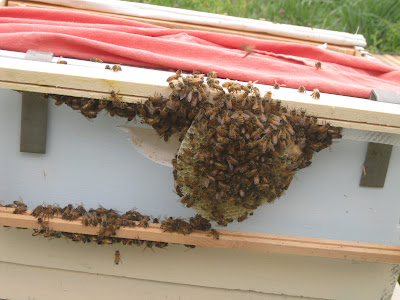 There is wax under the collection of bees you see in the photo below.  They are definitely busy bees, working hard to build wax for their own use.

I saw the queen in this hive and I saw eggs.  I'm sorry I didn't get her picture - she was a vision of loveliness to me! 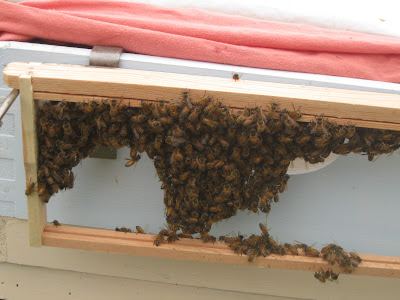 Here is the capped frame of honey I had left them.  They obviously used it as well. 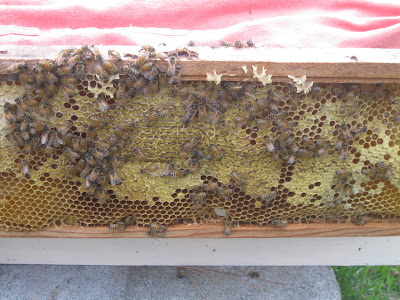 Again I left the inner cover feeding area more accessible and left the syrup can raised up enough for the bees to access the syrup, should they need it. 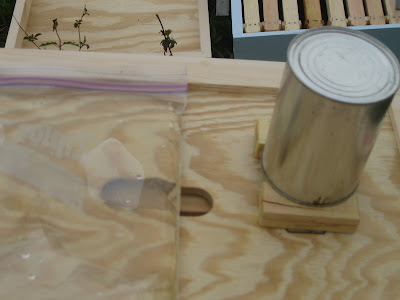 I'm back in N Georgia for a conference this coming weekend and will check on these hives again.  At that time, whether they need it or not, I'll leave each box with a new box of frames because it might be a couple of weeks before I'm back in the area and they will need it since the flow has begun in Atlanta and will in a few days in N Georgia.

Many apologies to any of you who visited the day I posted this.  Something is wrong with Picasa's relationship with Blogger and for my last several posts, the pictures don't upload but remain on localhost.  I'm sorry for the inconvenience.
Email ThisBlogThis!Share to TwitterShare to FacebookShare to Pinterest
at 8:50 AM
Labels: baggie feeder, Installing bees