Making an Even Split

My hive at Blue Heron made it through the winter and we only have one other hive there. I'd like to have two hives there, so I decided to split the BH hive. It was vigorous after winter and full of bees.

I added a fourth box with foundationless frames before the first MABA inspection last month. Julia reported that the bees had not touched that box when her group inspected a week later. She did see the queen in the inspection.  I started thinking they might be planning to swarm and I should do a split or checkerboard.

Michael Bush has a guide for how to do an even split on his website and since this is an 8 frame hive, an even split should be pretty easy. Jeff skipped lunch at work so he could join me to do this. I stopped by the hive on the way to work to move cinder blocks and deliver the equipment we would need.

This hive started as a Jennifer Berry nuc so it is in a deep bottom box. I searched through my home equipment and found a deep (surprise!  Almost all of my boxes are now medium ones)  and some frames. I painted the deep box and a slatted rack and SBB for the split hive.

In an even split, you place the hive boxes for the splits facing the old hive. The entrances of the new hives will face each other. When the foragers return, they have to choose which hive because the old hive will no longer be there. 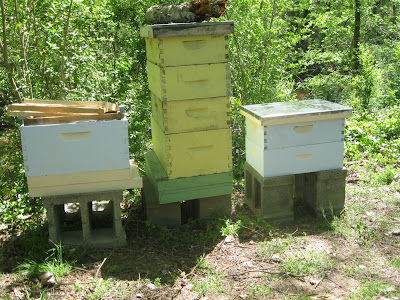 On the Beemaster forum, Brian said that I should place the new hives as if they were sitting down to dinner with the old hive, but the original hive is on the edge of an embankment so I had to put the new boxes beside the original hive.

Jeff and I arrived at 1:30 and found the hive with many fewer bees. There was every evidence that a swarm had already taken place. There was no sign of a queen. No eggs, no young larvae, lots of capped larvae, and the cells in the brood area had been back-filled with nectar.

The hive was calm, not roaring like a queenless hive.

There were at least six huge queen cells that looked far into their process. 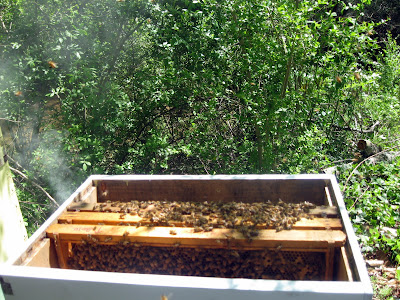 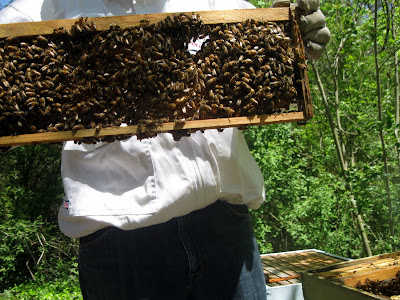 The six queen cells luckily were on two different brood frames in the second box of the original hive, a medium box.  We were careful to make sure that we put one frame with queen cells into each side of the split

In the photo below on the lower right you can see one of the gorgeous queen cells we found.  They looked pretty mature, so maybe our timing was good and the queens will emerge really soon so that the hive won't be too far behind. 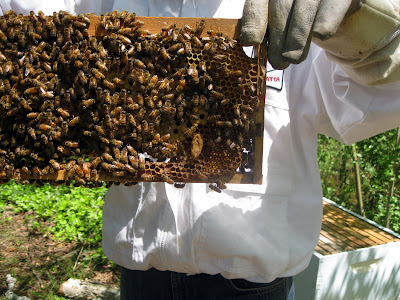 In the end, we evenly shared the honey frames, the brood frames, the pollen frames between the two new hives.

This was Jeff's first hive inspection - not exactly an inspection - since we did a split, but he was great.  Here he is working on replacing frames into position. 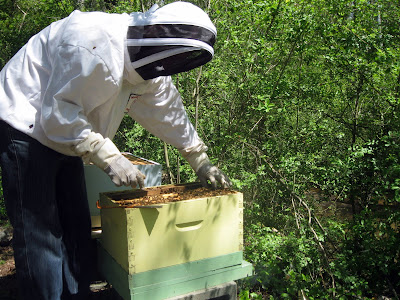 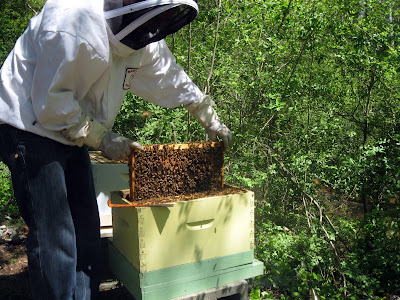 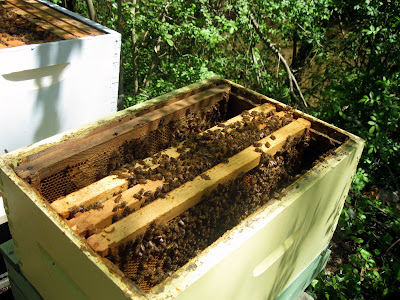 To make the transition from a 10 frame deep to the eight frame boxes above, we put a section of 2X4 over the uncovered frames and weighed it down with a section of log.  A brick would have been better, but I didn't bring one. 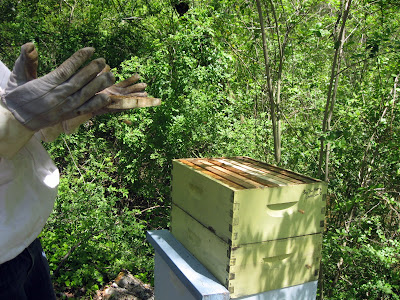 After all the work and bee-disturbance, we realized that we had put the yellow boxes on the blue deep and the blue boxes on the yellow deep, but we weren't trying to be Martha Stewart, just beekeepers making an even split for the first time!

My rationalization also is that the familiar smell remains in both boxes since the blue boxes would not have the original smell of the hive - we in a sense evenly split that as well! 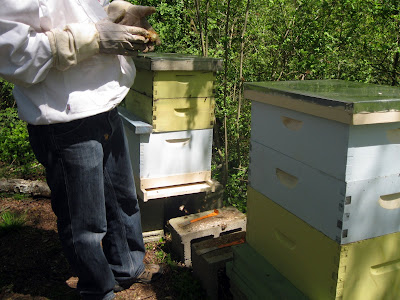 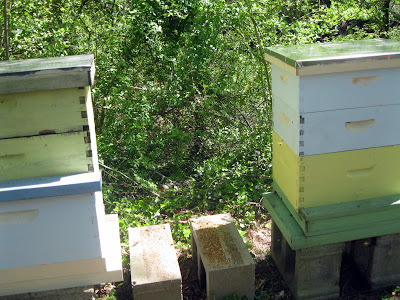 So this is how we left them.  Each hive has half the resources of the original hive all in the bottom two boxes.  The third box on each hive has a mix of old comb and foundationless frames.

The tulip poplar is beginning to bloom and the flow is starting, so we want them to have somewhere in which to store nectar.

The cinder blocks in the middle offered support to the old hive.  We'll move them  later.  The two entrances face one another.  We'll leave the hives this way for a week.

Shortly after the hive swap, we'll turn the hives 90 degrees so they will face east the way the original hive did.

For some reason the pictures aren't working so here's a slideshow:

Email ThisBlogThis!Share to TwitterShare to FacebookShare to Pinterest
at 3:31 PM
Labels: even split, Michael Bush, splits