Swarm Catcher and My Worst Sting Ever

Today I went to my friend John's house to purchase his newest bee gadget, a swarm catcher.  It's quite a deal.  Here's John's picture of himself with the swarm catcher: 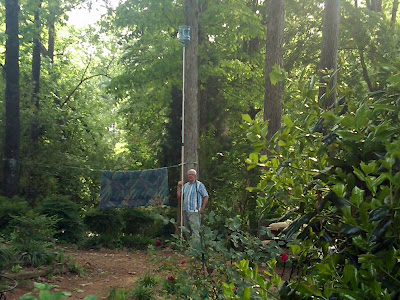 It's a plastic water jug on an extending handle that will extend up to 16 feet.  You put the jug under the swarm and scoop it up and dump it into a nuc box.

This device is made with an extending pole (the most expensive part of the gadget), an empty water cooler sized plastic bottle, 60 minute epoxy, and a paint handle to embed in the epoxy.  I can't wait to try it out (I'm getting too old for ladders!)

Here is a YouTube clip of how it works:

After purchasing this wonderful device, I asked to see John's beeyard. I haven't been there before. His hives are tall stacks, filled with honey. As we gazed at them in as friendly a way as two beekeepers can, a very UNFRIENDLY bee literally flew up my nose and stung me just below my nostril.

Made me think of Winnie the Pooh floating up in the air near a bee hive in a tree, who says to Christopher Robin:

"Christopher Robin!"  he said in a loud whisper,
"Hallo!"
"I think the bees suspect something!"
"What sort of thing?"
"I don't know, But something tells me that they're suspicious!"*

Now I've been a beekeeper for six years and have now been stung countless times. This was the most painful sting EVER. It was three hours ago and my nose still hurts almost as much as when it first was given to me by that unfriendly bee. I'm sure tomorrow I'll have a fat lip. I don't care about that, but wish the pain would go away.

I stand out in my own beeyards all the time with no protection and don't get stung. Guess John's bees were suspicious!