The Vanishing of the Bees

Valerie, my daughter, and I went to see The Vanishing of the Bees tonight in its Atlanta area showing in Alpharetta.  I saw a number of beekeepers I knew there.  Notice of the movie was sent out on the MABA email list, so that's probably how most of us knew to come. 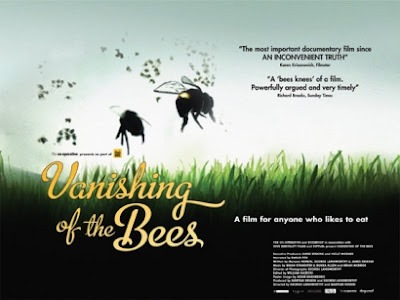 It was a good film, focused on the overall problems that the bee may herald as the canaries in the coal mine.  Michael Pollan spoke about voting with your fork, ie, buying local, organic produce.  Dave Hackenberg was as you might imagine, in the film as was Dennis vanEnglesdorp and Dee Lusby.  I even caught a glance of Keith Delaplane at a Congressional hearing on CCD.

People who are known and respected nationwide were featured like Marla Spivak and Maryann Frazier.

I didn't really learn anything new (except Michael Pollan's line about voting with your fork - great line!), but I was glad to vote for bees by showing up to see the film.

If it's in your area, it's worth going to see it.
Email ThisBlogThis!Share to TwitterShare to FacebookShare to Pinterest
at 11:36 PM