A powerful storm swept through the South on Monday night. The precursor of the storm was the strong wind I experienced while installing the second Rabun hive.

The winds blew down trees everywhere. In driving to an 8:30 appointment at Emory on Tuesday morning, I found my way blocked on three different major streets by huge downed trees.

One of Greg's friends (a former beekeeper) down in Butler, Georgia near our hives there wondered how our hives had fared through the winds and drove over to the farm to see.  He reported that six of the hives had the  tops and inner covers blown off.

He replaced them for us and let Greg know that the bees seemed fine.  Boy, these girls have had a difficult start!

Greg wondered about Blue Heron in the winds so I stopped by on my way home last night.  A heavy limb had blown down and it looked as if it had just missed my hive.  The log on top of the hive I put there.

You can see the limb and pieces of it on the ground beside the hive.  I cleared the area and threw the limb and its parts down the creek bank   I also put a limb on top of Julia's swarm lure hivel that you can see in the background. 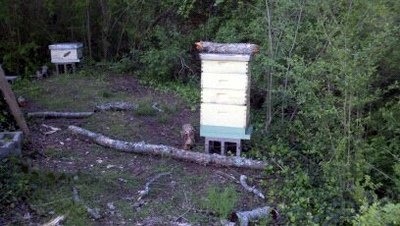 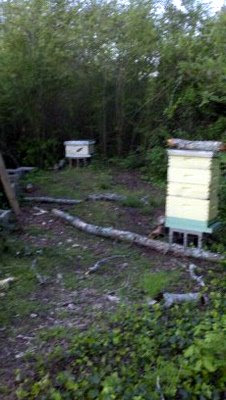 Email ThisBlogThis!Share to TwitterShare to FacebookShare to Pinterest
at 7:23 AM
Labels: storm damage