When I was a little girl, my father always loved the cartoon Pogo, drawn and written by Walt Kelly. It was a little confusing for me because there was a famous clown in the circus at the time named Emmett Kelly and I got the two mixed up and thought the clown wrote the cartoon in his off hours. Of course now I'm a beekeeper and there's a great beekeeping company called Walter T. Kelley. (Good I'm not still a child - think how confused I'd be).

Nonetheless in the cartoon, Pogo (a possum) and Albert (an alligator) frequently played checkers. When they did, Pogo often won and Albert had many responses to being beaten, most of which involved creating some kind of chaos. In one of my favorite Albert Alligator checker games, Pogo is winning and Albert suddenly throws the checkerboard into the air yelling, "Earthquake! Earthquake!"

If the bees at Blue Heron had read Pogo, they would have been buzzing "Earthquake! Earthquake!"  today when Julia, Noah, and I returned to the scene of the morning's inspection.

This is what it looked like in the middle of the chaos: 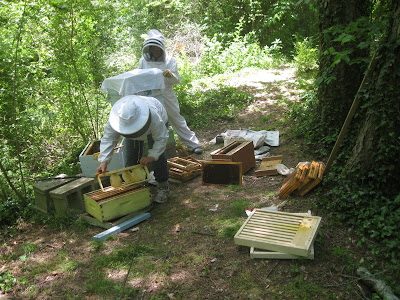 Noah took this picture below by accident, but I'm sure it's how the bee's world felt to them! 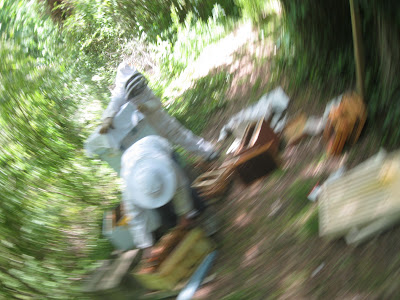 In the earlier inspection we found that despite queen cells in both halves of the split, neither hive had a queen.  I don't know if it was because of really bad weather over the last weeks; if I killed the queen when I dropped my hive tool through the one hive two weeks ago; if the emerged queens were killed going to or from their mating flights; or what.

The sad story is that the splits both failed.

I went home and stole a frame of brood and eggs from both Colony Square and Lenox Pointe.  They were none too happy since I had inspected both hives the day before and being opened two days in a row is more than disruptive.

I put the two stolen frames into a five frame nuc with some empty frames to make transporting it easy. 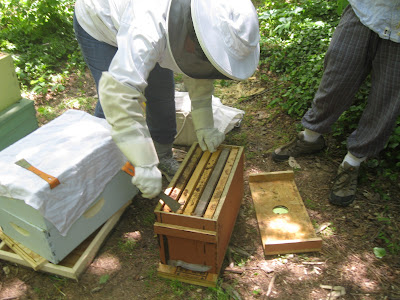 I made sure before the move that both stolen frames had eggs and very young brood on them....as well as capped brood.  The pheromones from the capped brood help the queenless hive avoid developing laying workers.

We removed two frames from the bottom box of the strongest of the two hives. 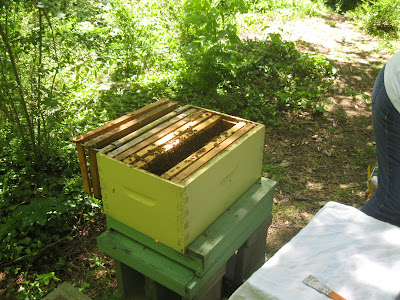 In their place we put the two frames from home. 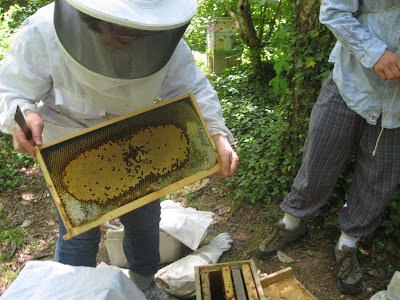 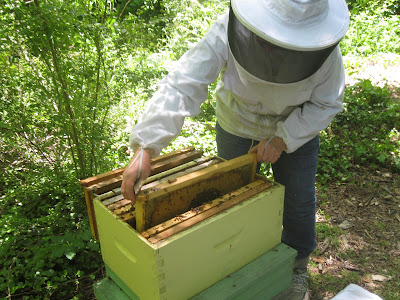 Both hives had a good bit of honey on them.  We put the boxes of honey back onto this hive.  Then we topped the box with a piece of newspaper.  You are supposed to trim the newspaper so that there are not edges hanging over to wick in rain water.  I forgot to do that and will return today with a pair of scissors. 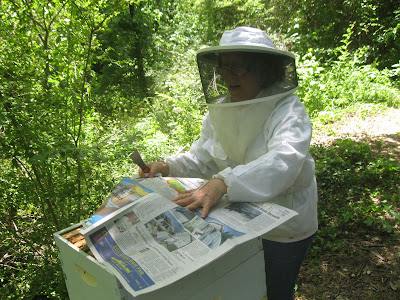 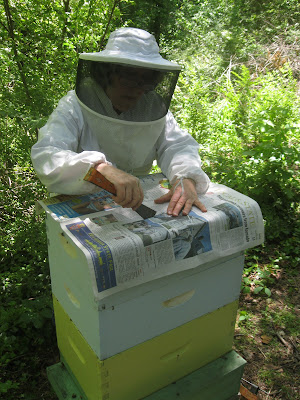 We then put a box on the top for the bees from the other hive.  One frame at a time we sprayed the bees with sugar syrup and then shook and brushed them into the new box. 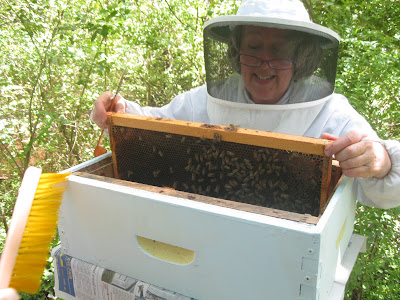 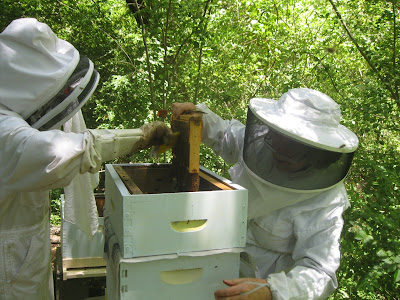 The frames we were shaking were deeps and the box into which we moved them was a medium.  We even shook the slatted rack and the screened bottom board. 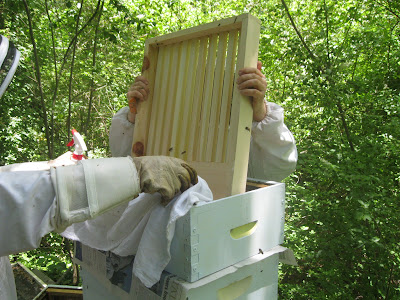 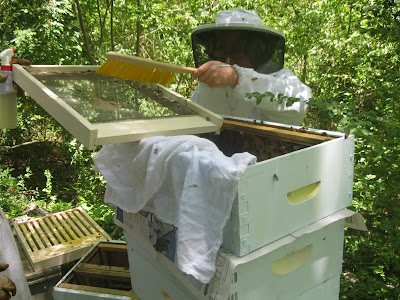 We then added all the honey frames from hive 2 to the box into which we had shaken the bees. 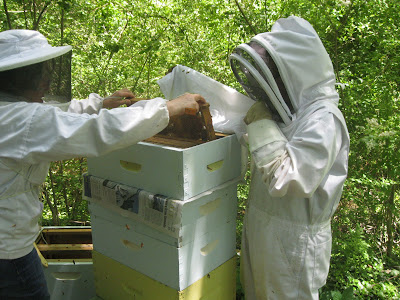 In the end when we finished the combining, there was STILL chaos all around us. We closed up the hive, cleaned up the "Earthquake" and went home with crossed fingers. We won't open this hive again for 21 days to give the queen time to emerge, go on her mating flight, and return to lay eggs.   I hope, hope, hope that this combined hive will survive, raise a queen and keep going.  We'll see on Memorial Day!
It was a difficult operation and I so appreciate that Julia and Noah came back with me to finish this project.  Both of them helped so much and Noah took most of these pictures.  They are wonderful friends and dedicated beekeepers and I enjoy every beekeeping minute with them.
Email ThisBlogThis!Share to TwitterShare to FacebookShare to Pinterest
at 8:49 AM
Labels: adding frame to queenless hive, hive combination, newspaper combine