End of the Week Hive Report So Far

Stonehurst Place:  Stopped there on Tuesday (one week from my last visit).  The bees were busily flying in and out but they had not drawn or used the frames in the top box on either hive.  Despite the way my bees are flying, the nectar flow must be slowing somewhat.

Home:  Also checked on Tuesday.  Colony Square had drawn and filled two of the 8 frames in the top box and was just looking at the rest of the frames in that box.  Lenox Pointe had drawn none of the frames in its top box. The swarm hive had not drawn any (they had been in the hive for three days at this point), so I made some sugar syrup and fed them inside the hive. 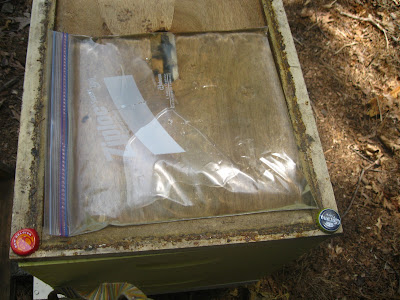 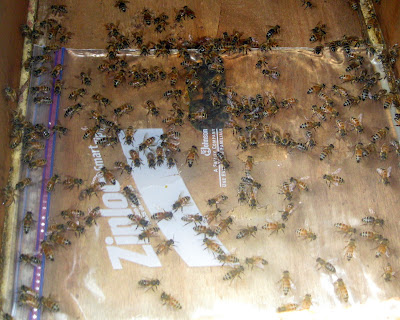 So today it was empty and so I replaced it with a full bag.

I opened up the swarm hive and the queen is laying.  I was relieved to see eggs.  I am so glad that the queen is there, but they have very little comb drawn - just about four frames in the top box and are not using the bottom box at all. 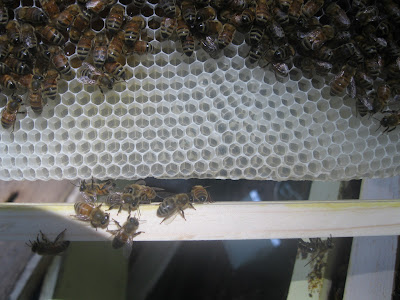 Blue Heron:  We had terrible weather in Atlanta last night so I didn't check on the Blue Heron this week.  The hive combination should have taken by now and the queen should have been raised.  (We combined the hives and gave them resources to make a queen on May 7).  However, we won't open that hive until June 19 when the next hive inspection is scheduled.  That way the queen has time to get out, get mated, and begin laying.

Rabun:  I'm going up to the mountains tomorrow and will check on the hives there.  It's about to be sourwood season, so I'll make sure they have honey supers ready for honey storage.

Topsy and  Linda T's Bees in South Georgia:  Haven't been to either in a while, but will go check on Topsy on Monday and will go to South Georgia in the next couple of weekends.  Greg is down there looking over the situation this weekend so I'm not too worried about them.
Email ThisBlogThis!Share to TwitterShare to FacebookShare to Pinterest
at 6:22 PM
Labels: Blue Heron, installing bees from a swarm, Rabun County Community Garden, Stonehurst