I last checked the Rabun hives two weeks ago. At that time there was an egg in every cell in the first hive, the 8 frame one. Today I saw no eggs at all, no brood, nothing. There was capped brood (probably from the brood I saw two weeks ago), but no new eggs. There wasn't a queenless roar and the bees were peaceful. 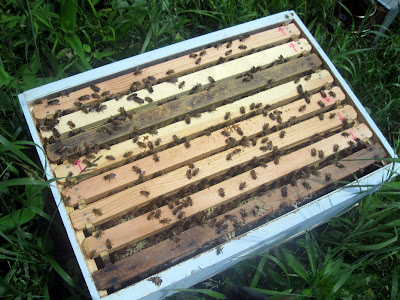 They were storing gorgeous honey: darker than the honey I'm seeing in Atlanta, but not raising bees. 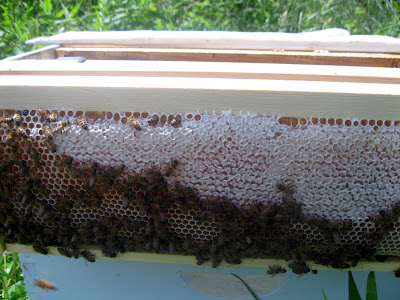 1. Maybe I killed the queen in the last inspection (horrors!)
2. Maybe they didn't like the queen, raised a new one and got rid of the old one, but there hasn't been enough time for her to get mated and start laying yet.
3. Maybe for some bee reason that I can't fathom, the queen is taking a break from laying but is in the hive. 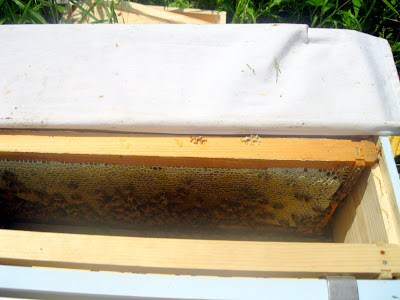 So I went to Hive Two (they need names, don't they?) and stole a frame of brood and eggs and put it in Hive One and left with crossed fingers.

The sourwood flow should start soon, so even though neither hive needs it, I will leave an extra box on each hive on Monday when I go home to Atlanta. 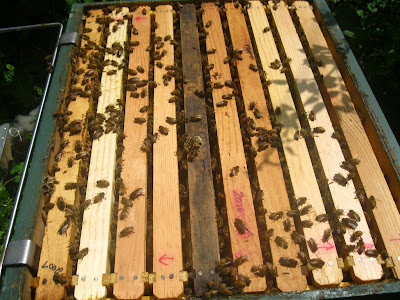 Maybe since the hives are in Rabun County, I'll call them Warwoman and Tallulah for wild areas in the county.  So the 8 frame is Warwoman and the 10 frame is Tallulah.  That will help me write more distinctly about each of them!