In the terrible tornado weather in the Southeast on April 28, Rabun County, where my bees are located, suffered two tornadoes. One occurred about 2 miles from the hive at Lake Burton and the other occurred in Mountain City, another two miles in a different direction. I wonder how the barometric pressure changes in such terrible weather affected the bees?

Both of these hives were started with packages in early April. Both hives have built out the bottom box and one of the hives had started in the second box. Hive One which is housed in 10 frame medium boxes had not built in the second box at all.

In the first box the frames with the most mature capped brood looked like the one below. Pretty good brood pattern, some holes where bees had emerged, and a general good healthy look. 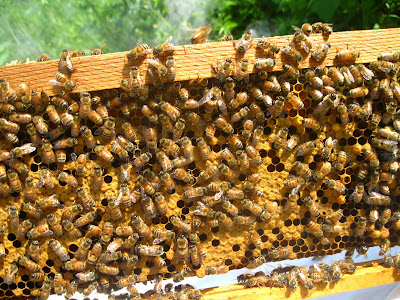 I found some odd laying patterns but still wondered if the tornado and accompanying weather phenomena affected the queen and her laying. The capping was new looking and fresh. Since larvae is capped about seven days after laying and the tornado was less than two weeks ago, I wondered if the odd drone pattern represented confusion in the odd weather pattern when the eggs were laid. 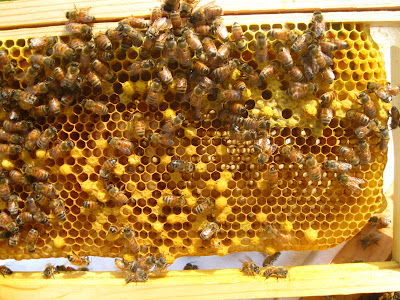 The good news about this hive is that almost every empty cell was filled with eggs or young brood.  Perhaps the queen is back on track or perhaps this drone laying pattern is an indication of a bigger problem for the hive. 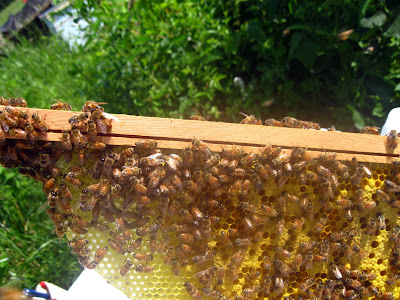 I love the yellow tint of the wax in the newly built comb because of all the pollen coming in.  Hive one was only housed in the lower box, so I left it with two medium boxes as its configuration.

Hive two, housed in eight frame medium boxes, had built out all the frames in the bottom box and had drawn out three frames in the second box where they had proceeded to store nectar.  Also in hive two there was an egg in almost every cell. 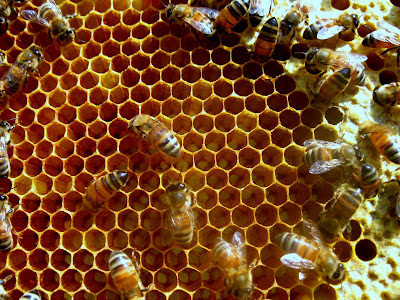 I left the hives with bottle caps on the inner cover corners to raise the lid slightly and provide more ventilation.

I'll be back Memorial Day Weekend to see how these bees are doing. 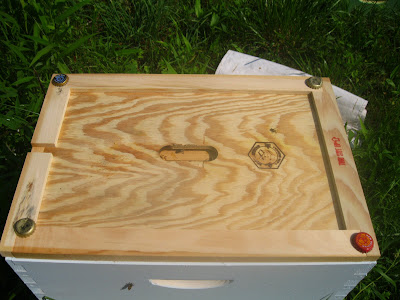