What a Honey Harvest We Will Have in Atlanta!

I'm not going to be able to get the top box off of Colony Square without a ladder! And the nectar keeps coming. The tulip poplar flow is long over but the bees are finding other sources - probably sourwood, sumac, mimosa, and garden flowers. It's amazing. The golden flow of bee bodies flying up into the air from the hives is going on when I wake up and still going on when I come home just before dark. Amazing year!

After two years of no honey harvest, this looks like a really good year. 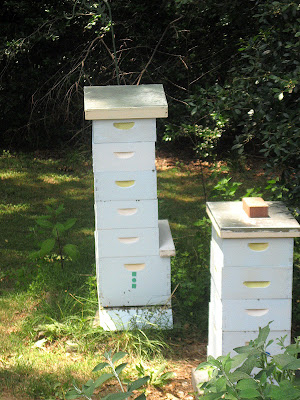 In Lenox Pointe, the bees had not moved up into the empty top box although the box below it is full of burgeoning honey comb as you can glimpse in this picture. 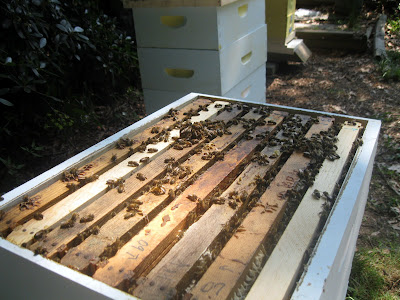 So I moved two of the fat combs from the box above into positions 2 and 3 in the empty box below and put the box on the hive below a full box. We'll see if that works. 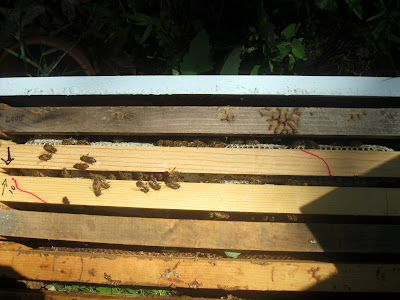 In the moving some honey leaked onto the inner cover. Who sends out the alarm, I wonder? Before you know it, there's a line of bees sucking it back up to return it to the hive. At the lower left of the picture, one bee is transferring what she just lapped up to the mouth of another bee! How do they get the message? 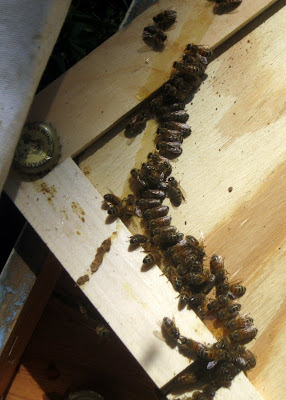 Meanwhile I also went over to Stonehurst and here's what the gorgeous honey looks like over there. 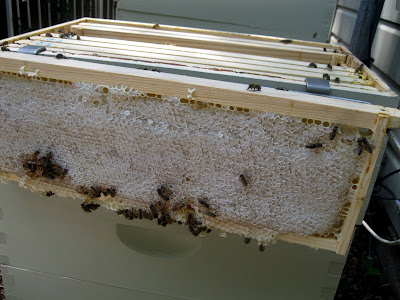 Email ThisBlogThis!Share to TwitterShare to FacebookShare to Pinterest
at 3:10 PM
Labels: bees on the front entry, honey harvest, ladder