The Many Lives of Topsy

Like a cat, I think Topsy must have at least nine lives. Started out as a top bar, but the bees absconded. I fooled around with the top bar box and situation (removed the legs and set it on cinder blocks; blocked the screened bottom board, gave them some old comb) and the bees were reinstalled. This time they stayed.

We've had numerous problems with the hive building comb attached to the side of the top bar. Jeff and I practically destroyed the hive one day as we tried to unhook the comb from the box sides. We killed lots of bees and made a complete mess of the whole thing.

This year I decided to leave it entirely alone because every time I addressed the problems in Topsy, I made it worse and often killed bees and destroyed comb.

A few weeks ago we tried to split Topsy and the very next day, they had absconded once again, leaving the two boxes practically devoid of bees. I had gone to the beach with family. Jeff found the swarm behind his fence. The problem was that the long handle of my fancy swarm catcher was available to him but the water jug was not.

Enterprising, Jeff bought another water cooler bottle and cut off the bottom. His cat helped!

Since he didn't have the epoxy, he duct taped the water cooler jug to the long handle.  Then by himself with no help and nobody to record it, he captured the swarm.  The night before he had delivered the hive into which we split Topsy to my back yard.

He dumped the bees into a banker's box that he outfitted with screen wire over the handle holes to create ventilation and drove the bees to my house.  He put them in their split hive box but in a new location: my backyard.  He then added the second box of the split, setting it right beside the first box.

My mentor from Virginia, Penny, wrote me that it was possible that the queen was not with them since they didn't really have enough time to get her skinny enough.  I had hope though since we brought both of the split hive boxes that if the queen did not go, perhaps she was in the box waiting for her bees.

I left them alone for a week.  I put their own honey in a hive top feeder and crossed my fingers.  Then  on Saturday, I opened both boxes to combine them. 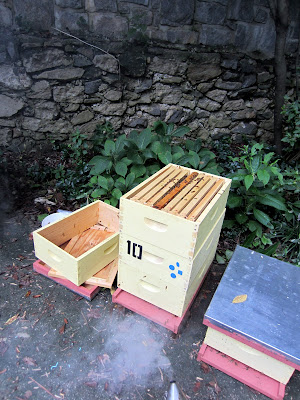 From the largest hive I had ever seen, the bees had dwindled - partly because we killed a number in splitting the hive and partly because of age and disturbance.  I was discouraged and put both boxes together noting that there was empty comb where we had rubberbanded in brood and that the hive looked forlorn. 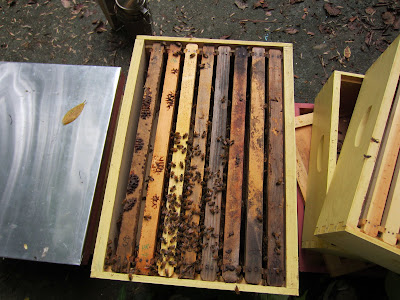 I did notice a couple of frames with new wax on them, but at that moment my dog Hannah ran away from home.  She is quite smart and has discovered how to climb over the rock wall fence around my backyard.  I dropped everything and went to find her.

I couldn't get that new comb out of my mind so after retrieving Hannah from a neighbor's yard, I went back to the Topsy bees and pulled those two frames.  To my amazement, there were eggs, tiny c-shaped larvae and hope for the future.

I immediately gave them some more honey and put on an entrance reducer. 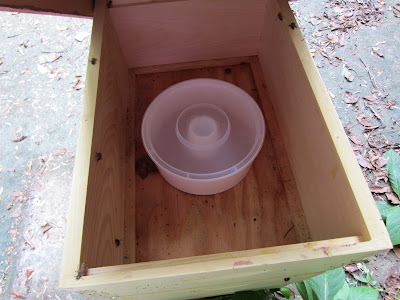 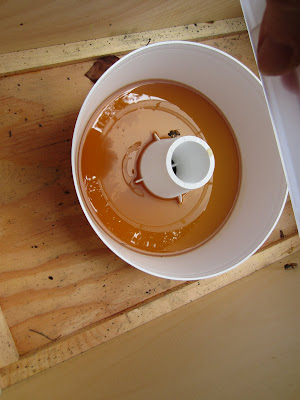 So Topsy is still surviving - in new form and very small and weak.  I harvested honey this week and put the dripping frames from Colony Square onto Topsy to give her more resources.  We'll see........