The Eternal, Never-Ending, Beyond Challenging Saga of the Wax Block

So it's honey contest time of year and once again I face the challenge of the wax block.

A man sent an email to me telling me that he had poured a gorgeous wax block by putting the wax, unmelted into the mold in the oven and turning the oven on to 150 degrees. When the wax had melted in the mold, he turned off the oven and put a pane of glass over the mold. It was, he said, the perfect block.

The Georgia Beekeepers Association had its fall meeting and honey contest this past weekend. In preparation for it, I tried the melt-the-wax-in the mold plan - TWICE. Both times the block had a huge crack in it. You can see the crack in the melting wax in the photo below. 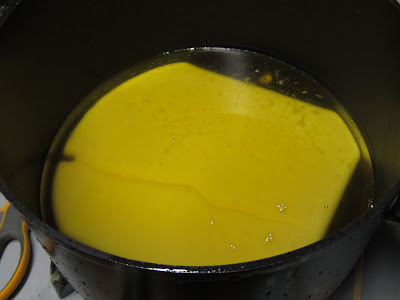 So I went back to the tried and mostly good method I've been using in the past few years. First I melted the wax in my converted Presto Pot.  I want a good block for the Metro Atlanta picnic, auction and honey contest this weekend.

While the wax was melting, I put my Pyrex measuring cup (8 cup) in a pan of hot water so that the wax would not harden the minute it filtered into the measuring cup. 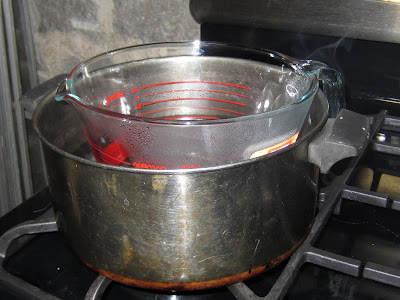 I put a large pan with about an inch of water in it into my basement oven and turned the oven on to 195. I also put the glass brownie pan I was using into the pan of water to heat up as well. 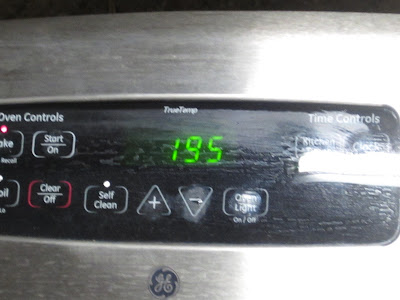 When the wax was all melted, I fitted the measuring cup with silk, held to the cup with a large rubber band. You can see the end of the wax as it finally finishes filtering in the picture below. 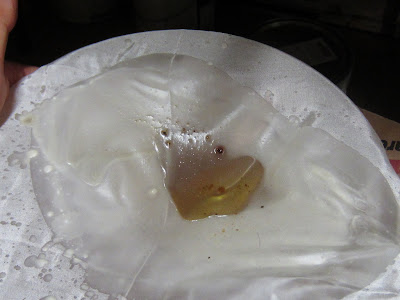 I poured the melted wax from the measuring cup into the glass mold in the hot water bath in the oven, covered it with a pane of glass, and left it overnight to cool and harden.

The next morning the mold looked like the perfect block. There were no ripples on the surface (I covered the mold with a pane of glass in the oven as it cooled over night). Here it is sitting in the freezer to release the wax block from the mold. 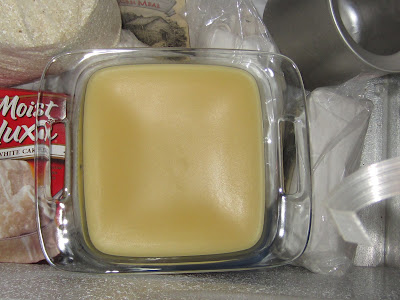 Oh, NO, not again (and again and again). The perfect block has wax blemishes on the sides where the wax has adhered to the pan. 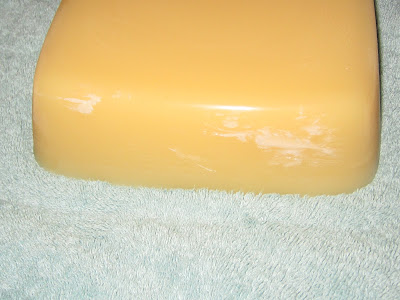 It's on three sides - MOAN and GROAN and MOAN some more. I simply can't pour a good wax block this year. This is pour THREE (at least it's not 18, I hear you thinking).

Look at the no-ripple top. Doesn't it make you sick to think that I have to do it all over again? 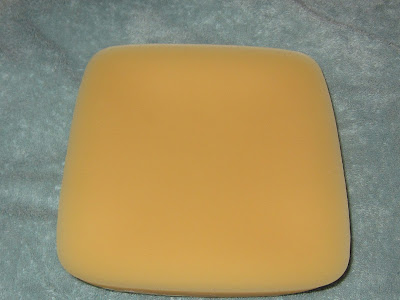 So tonight I repoured this light wax into a brand new no-stick pan. (I actually think the secret to a good wax block may be to use a new pan every time)  At the same time I also melted some slightly yellower wax and poured a brand new Pyrex round casserole used as a mold. I am cooling and hardening the square block in the hot water bath in the oven with a pane of glass over it and I am cooling and hardening the yellower wax on my workbench. It is also in a hot water bath with a plastic cover over it.

Sorry about the pictures - Picasa lets me down again.  I'll upload them one at a time from my computer.
Email ThisBlogThis!Share to TwitterShare to FacebookShare to Pinterest
at 12:05 AM
Labels: melting wax, Presto pot, wax block