Happy Blues for the Honey Contest

Well, my jarred honey - light and medium - did not place at the honey contest this year. While that honey may not have placed no matter what because there were a lot of great entries, I have to confess that I used all old jars and one should never do that, so next year, it's new jars for me. Much of honey judging has to do with presentation and mine, sad to say, were all in old jars (which show their wear or have smudges from the dishwasher, etc.) , but I got several blue ribbons and one red one.

My chunk honey came in with a blue ribbon. This is the first time I've used these jars that are designed specifically for chunk honey. I loved them and will use them again. 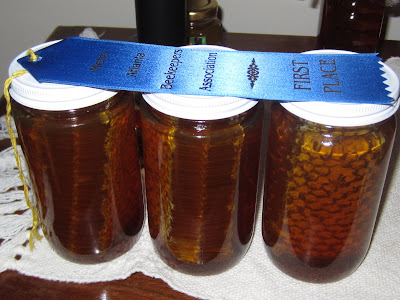 You know the wax block saga and this is pour # 6. I marked the pan that I used for this one, but likely it will not be used again for wax blocks, but rather for bar cookies or some other such cooking use. 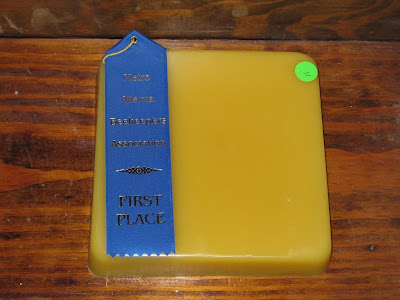 And I got a blue ribbon for crafts - this was a quilted bag that I made - all original. I made up the pattern. The bee skep is on a pocket. It has pockets on the inside of the bag (six of them). 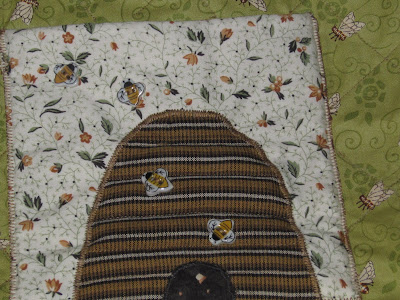 I got the idea for these handles from a book and really was pleased with how they turned out as well. 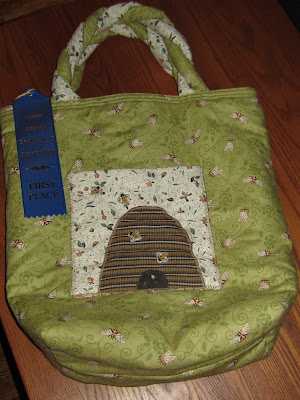 My beekeeping buddy, Noah, won the blue ribbon in cut comb honey and mine came in second with the red.  Mine had lots of problems - wet cappings, some honey on the bottom of the container, but what the judge said was the midline was not straight!  I laughed - it's the bees fault, then!

When you go foundationless, the bees determine where they want the midline rather than the beekeeper who has more control with wax foundation.  So I guess if I keep entering cut comb, I'm going to have to be more selective about my creative bees!

Noah also uses foundationless frames - I think his cut comb came from his top bar hive - and the judge essentially said it was a perfect entry.  I know he's not my kid, but I was so proud of him for getting that blue ribbon as a teenager.

My friend Scotti Bozeman won many ribbons including best in show!  This was only her second honey show.  She's in the center with the two Welsh honey judges, Evelyn and Marcy on either side. 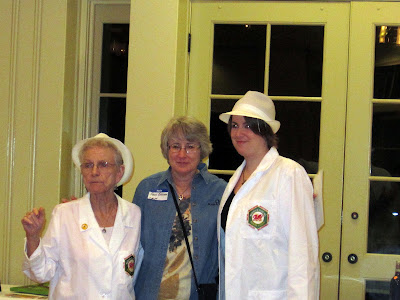