I Should Bake More Brownies: Results of the "Final" Pour

To do the final pour, I bought a brand new pan. I now own at least fifteen 8 inch square pans - some glass, some silicone, some nonstick metal, some aluminum. I should open a brownie bakery!

This new pan did not do well for the ninth and "final" pour. See the dimples on the surface? I didn't use mold release but it was a nonstick pan so this wasn't great. 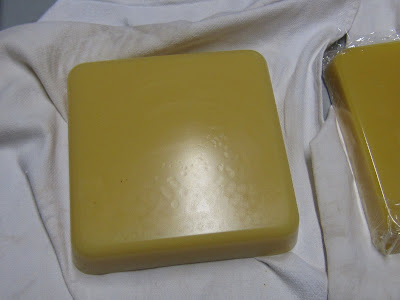 Also I cut a new square of silk to filter the wax through, but there are particles in the wax that should have been caught by the filter. You know how there's many a slip twix the cup and the lip? Well, I think these particles fell into the wax as I took the silk off of the measuring cup at the end of the filtering. I'll work on a better system for that next year. 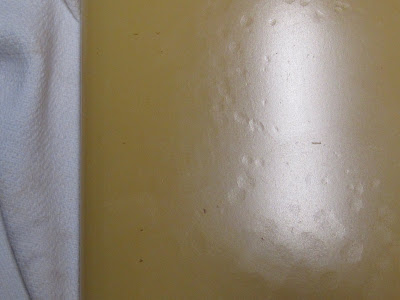 And the top of the block had an odd swirl to it. I did this pour during the day time and motion in the house makes this happen, even when the mold is in the oven and is covered with a pane of glass. 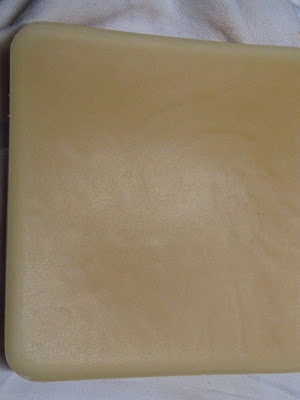 So choosing between the two, pour number six won out and that's the one I took to the show (on the right covered in plastic wrap). 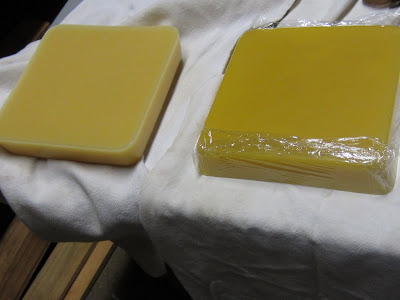 Oh, and by the way, I was about to throw out the first piece of silk, now completely caked in wax and then thought, NO.  So I put it in a pan of boiling water, turned the water off, and in the morning the wax was on the water's surface and the silk was clean and ready to use again!  Hooray for recycling.

Email ThisBlogThis!Share to TwitterShare to FacebookShare to Pinterest
at 10:25 AM
Labels: honey contest, wax block