In Atlanta we had a sudden drop in temperature from the highs 60s to the 20s where the temperature has remained for several days.  When it's cold like this, we only have highs in the 30s at best.  When this goes on for several days, the bees are in real danger.

The warmish weather fools the bees into acting like it is spring and they go out, forge for pollen, raise brood, etc.  Then suddenly we have this kind of cold snap.

The whole hive can die, if the cluster isn't located where there is stored honey.

So I am crossing my fingers and hoping for the best.

I have one dead hive in my back yard.  I looked through it the other day when I did my first powdered sugar shake.  There is honey in the hive and dead bees scattered through the frames.  I didn't take the bottom box off (too big a hurry to get back to the office), but I'll let you know what I find when I do.

My current theory is that the hive went queenless before winter and I didn't recognize that this had happened so I could combine it with another hive.  I may find something else when I look further and then we'll know more, but for now, I'd speculate that the hive died naturally because there was no queen. 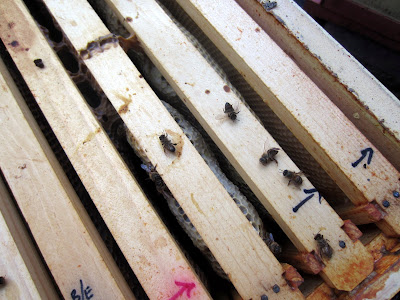 In the photo above you can see the few dead bee bodies on top of the frames.  I'll look at these for signs of varroa or deformed wing when I get back into the hive. 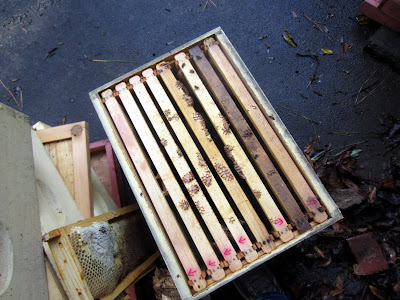 For now, I put it back together until I have time in the next few days really to study it.

There was a rapid feeder on top of the hive still half filled with bee tea with a number of dead ants floating in the tea.  I strained it into a jar and may put that on another hive if I don't find evidence of foul brood when I study the cells in the dead hive. 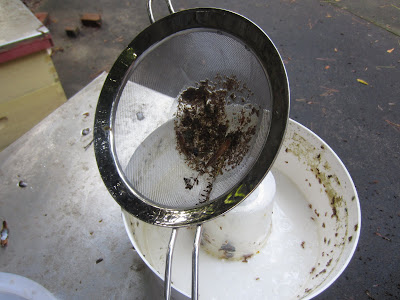