Report on January State of the Rabun Bee Hives

There's good news and there's bad news. Both of these hives were small and not too great going into the winter. The dark green hive had been covered by kudzu at the end of the summer - the gardeners who maintain the area around the garden didn't realize I had two hives and let the kudzu win. I would take garden shears with me every time I went and cut back the area around the entrance but the kudzu definitely won.

I anticipated that these hives would not make it through the winter. I've already ordered packages of bees to replace them, assuming they would die.

Today on my visit to the garden, I found out that the dark green hive at the Community garden in Rabun County is bee-less. I'm sad, but not surprised that they are gone. At first without investigating, I put some food on the hive, assuming there might be bees, but when a hive is dead there is an eerie silent feel and I realized that there was no life there. 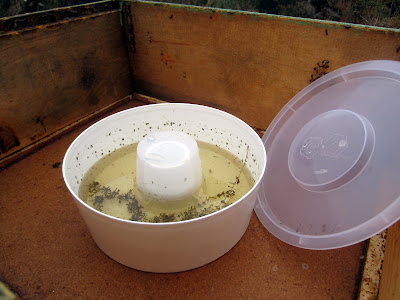 But then I went to the second hive and lo and behold there were bees flying in and out. They were really there and I was astounded. The hive felt alive when I opened it, even though I didn't see bees anywhere except at the front entrance. What a relief! 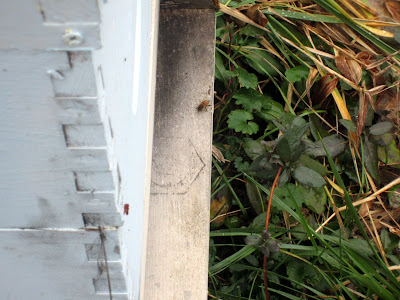 I saw as many as six bees at the same time, but couldn't snap a picture fast enough - aren't digital cameras irritating that way?

Anyway, I took the feeder off of the green hive and poured the contents into the feeder for the living, breathing hive - HOORAY! Hope for the future at the Community Garden.

Interestingly there were spiders nesting in the corners of the top cover of both hives. I like them better than roaches! 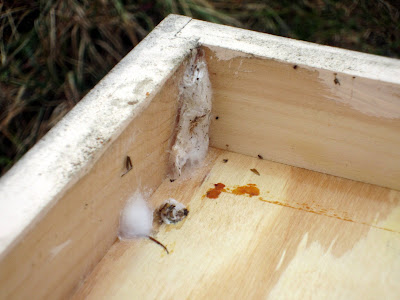 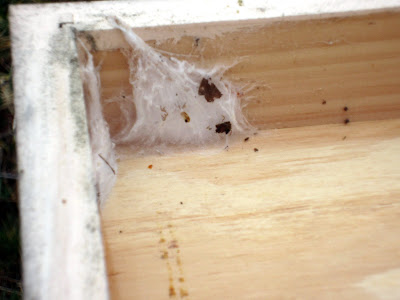