Live Bees at Blue Heron and at Jeff's

The bees in the nuc at Blue Heron are ALIVE! I really can't believe it. These are the vandalized bees that are now housed in a nuc and locked with a bicycle lock against further intrusion. I did not believe they would still be OK and we are not out of the winter death possibilities until March. At least for now they are flying.

I couldn't believe it so I took four pictures to prove to myself that they actually are coming and going. You can watch a hive and tell if the bees entering and leaving it live there or are robbers from another hive. The residents enter confidently and in one fell swoop into the entry. Robber bees are unsure and tend to hover around the entrance before going into the hive.

These bees own this hive. 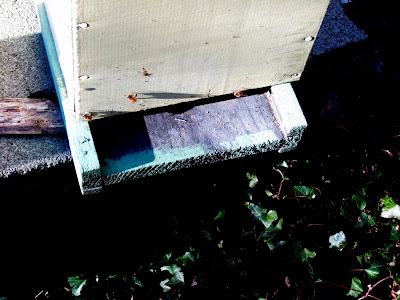 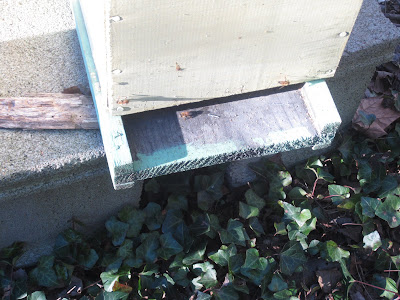 At my old house where Jeff and Valerie now live we have two hives we are concerned about - now three. Colony Square is doing great with bees all at the entrance. Lenox Pointe has bees but also evidence of nosema, possibly, in that there are streaks of bee poop on the hive box at the entry way.

The hive we call "Five" is still alive. It was tiny going into winter and we had talked about putting it into a nuc, but never did. It is housed in two medium boxes. Jeff hasn't seen any bees flying in or out, so we opened the top to take a peek. The rapid feeder was still on the hive and there were bees walking up and down the sides of the cone. We both whooped out loud to see actual bees alive in the hive. 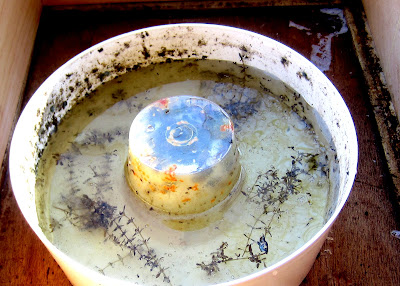 Our fourth hive over there is the swarm we caught in June. Although small, it too is alive and had bees in the feeder cone of the rapid feeder.

Don't be disturbed by the mold in the rapid feeder or the "weeds." The weeds are actually sprigs of thyme and we'll clean out the mold on our next opportunity to open the hive.

Today it was still quite cold and we didn't want to remove the rapid feeder to clean it because it covers the hole in the inner cover and the bees are likely to have propolized any air space to maintain warmth. I'll take warmth over cleanliness if they can make it through the winter.

Jeff and I are following Jennifer Berry and Keith Delaplane's system for powdered sugar treatment for varroa mites.  We are dusting the bees with the Dustructor - which means dusting without opening the hive - four times this month (three days apart) and then will repeat this in March.