We checked on Lisa's hive when we installed the swarm at Blue Heron yesterday.  We haven't inspected this hive since we moved it about three weeks ago.

The news wasn't great.  We thought the hive felt really light when we moved it.  Remember three of us picked it up and I had so little/no weight that I was bearing so I let go to take pictures?

Inside we found in the upper box frames that were barely drawn and not used. 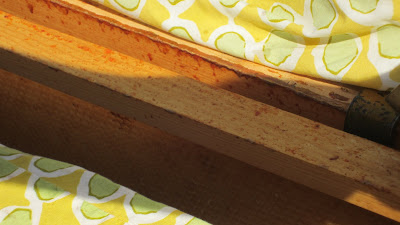 The hive had what I think were earwigs (see bug at the bottom of the frame) living in it throughout the hive. 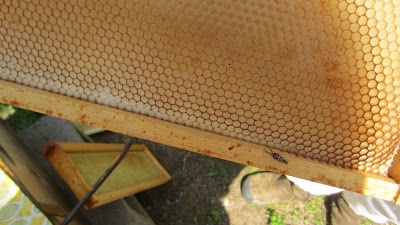 We found brood that was spotty and dead and old in the bottom box.  But there were two queen cells that had been opened - one ripped open on the left and the other properly opened on the right indicating that the queen had emerged and killed the remaining queen in her cell. 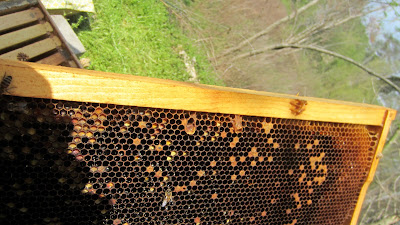 We also found lots of stored and crystallized sugar syrup. 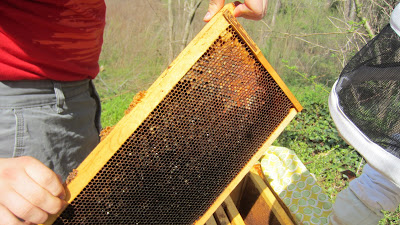 There was about a baseball sized handful of bees.  But in the medium box we found three frames with new brood and some eggs.  The size of the new brood area was small but the queen can't lay more than the bees can manage to nurse.

Just yesterday on the Beemaster forum, Michael Bush wrote that if he had only a baseball sized cluster of bees, he would try at this time of year to give them the resources to succeed.

We decided to reduce this hive to the medium with the three brood frames.  Julia and Noah will bring them a frame of brood and eggs from another hive at their house.  We also took out some of the old-comb frames and substituted new foundationless frames to give them a healthier start. 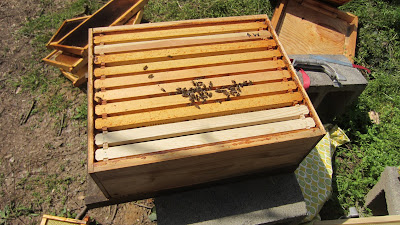 Noah brushed all the bees from the deep frames into the only-medium remaining box.  This hive was quite a contrast to 2Cat which we had just installed.

We put the lovely top cover on this now tiny hive and left it with hope for the future. 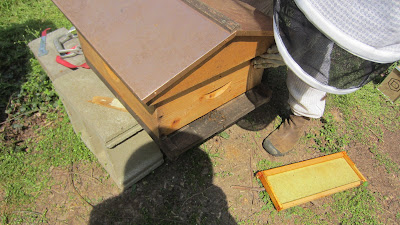