Today I did a deep inspection of the hives at Stonehurst Place Inn.  I knew one hive was dead and wanted to find out why they had died.  I suspected they starved/froze in the cold few days we had when it was 19 degrees here after a warm spell.

I also wanted to check the first hive to see if they appeared to have swarm plans.  I had given them a new box when I was here a couple of weeks ago and discovered that the second hive was dead. 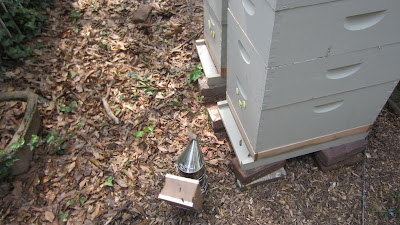 The top box which I had given them at the end of February had three frames of drawn comb, two frames of barely drawn comb and one frame with comb being built from the bottom.  This is because I just threw this box on top of the hive and didn't give them a full frame from the box beneath to act as a ladder.  I moved this bottom drawn comb to the edge of the box.  If they don't fill it out, I'll take it out on my next visit.

The second box was heavy with capped honey and uncapped nectar. 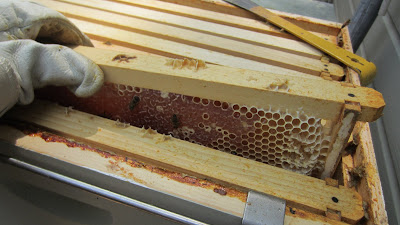 When I lifted off the box to look at the one underneath, I broke open honeycomb they had built between the boxes - they were distressed and immediately began re-gathering the honey because the bees will store this again.  They do not waste something they worked so hard to create. 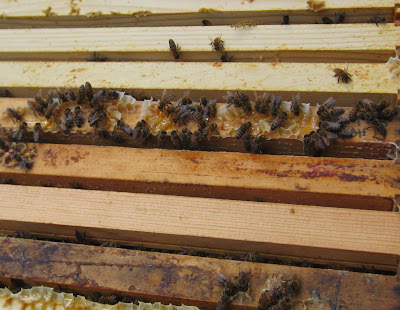 The capped honey was what is called "wet cappings" because the bees lay the wax cap right on the honey creating a wet look.  I wonder what influences their choice to make wet or dry cappings?  Anyway, this hive is on track to make a lot of honey.  We'll probably need to harvest early and maybe more than once. 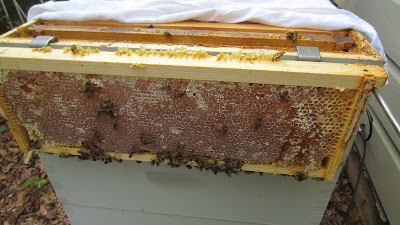 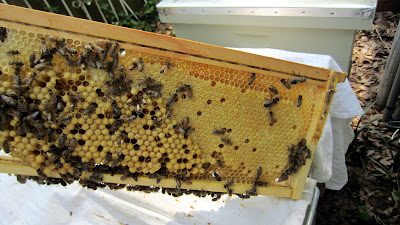 There are both drone cells (the highly rounded tops) and worker cells on this frame.  Some of the drone cells are not fully capped and you can still see the larva through the opening in the top of the cell. 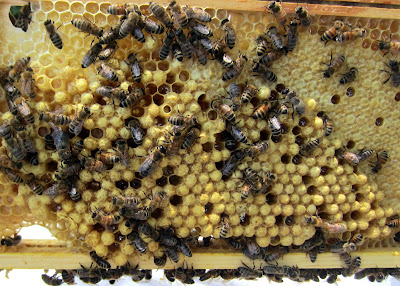 I thought it was interesting that they put drone cells occupying one whole side of this frame. 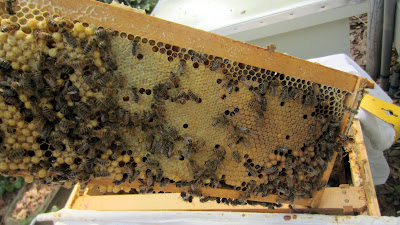 In this comb you can see worker brood capped to the left, and uncapped larvae just to the right of that.  Then in the open cells there are eggs.  You may have a hard time seeing the eggs in the cells with the light behind them, but in the cells with the darker background, you should be able to see a lot of eggs (at about 1:00 in the photo). 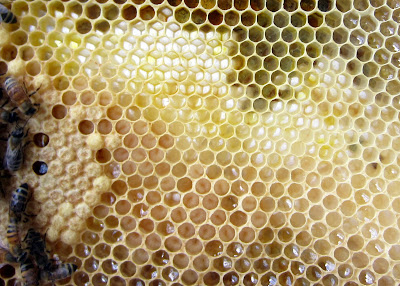 I was planning to remove the bottom deep but the bees had drone brood between box 1 and box 2 as well as between box 2 and box 3.  When I pulled up frames from the bottom, it's true that they weren't fully using the frames, but there was brood as well as nectar stored there.  The good news is that I didn't see a single queen cell or even an opened one, so these bees must not be planning to swarm - at least not right now. 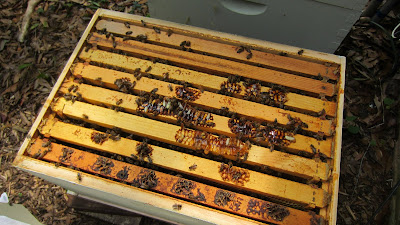 When I opened hive #2 it was clear that they had starved.  The bees were flying around in January when I did the powdered sugar shake and the hive looked healthy.  Right after that, though, we had a string of four or five days with weather too cold for the bees to move or fly.  These bees died then.  There was a baseball sized cluster of bees - you can see the top of the cluster in this picture. The frames were sickening.  They were clustered through three frames.  A sure sign of starvation is to see their little rear ends up in the air, heads down in the cell, getting the final sip of honey before all dying together. 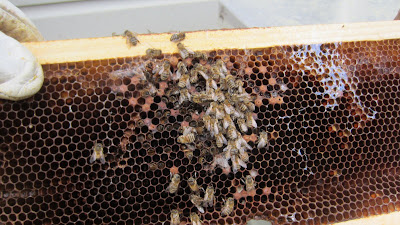 We've ordered two nucs for Stonehurst - a nuc to replace this one and a new nuc to make a third hive.  It's going to be really crowded back there, working the bees, but the Inn will be glad for the opportunity to make more honey this year.