Yesterday I got a swarm call to go to Decatur and collect a swarm from someone's yard.  It was reported to be about 6 feet up and when I got there, that was the case. 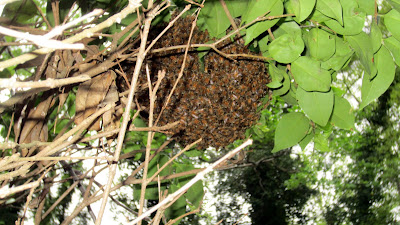 I put a sheet under the swarm and collected them with the water jug part of my swarm catcher.  I dumped them into this banker's box (a pretty easy way to carry a swarm home). 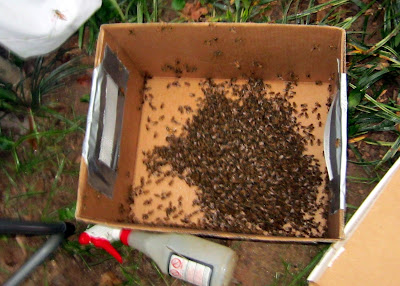 I was so glad I had put a sheet under the swarm.  There were lots of bees on it and I shook them into the banker's box.  They didn't all leave the sheet so I rolled it up and put it in my car. 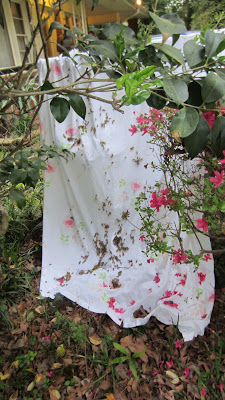 I used clippers to cut off the branch with the remaining bees on it.  I put the branch, bees and all into the collection box. 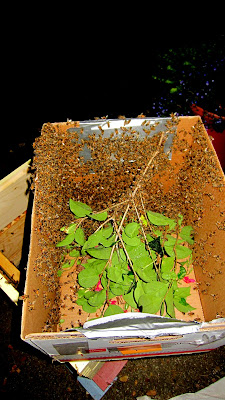 Once home it was dark and I installed the bees into a hive box and put in frames, one with old comb. 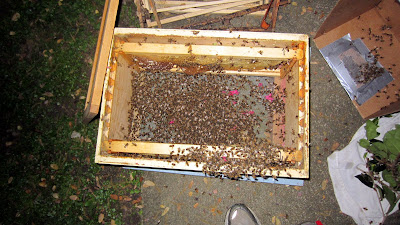 So they are now living in my apiary.  I hope they do well. 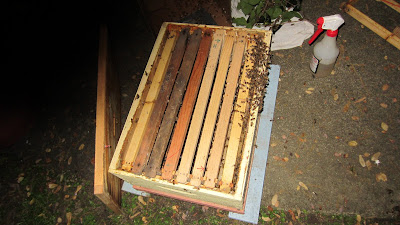 Tonight I had company for dinner and as the guests arrived (also beekeepers) they pointed out a swarm of bees in my own front yard that had landed on an azalea bush.  I'll collect them in the morning before I drive to Rabun County to install bees.

They can't be from my hives since I only have the two splits: SOS1 and SOS2 and the swarm I collected last night.  I do also have the MABA club nuc which I just got and was described as being "about to swarm."  Or maybe this is a secondary swarm from one of Jerry's hives (Jerry lives about a football field's length from my house on another nearby street.

Email ThisBlogThis!Share to TwitterShare to FacebookShare to Pinterest
at 12:03 AM
Labels: installing bees from a swarm, swarm collection