It's March and Colony Square is Bursting at the Seams

Today I gave a talk at the Riverside West Garden Club in Sandy Springs (part of Atlanta).  I reviewed the talk last night and packed the car this morning.  Yesterday I volunteered at the Publix Marathon in Atlanta (5:30 AM - 1 PM); worked the bees with Jeff in the afternoon; and went to a bee course planning meeting over dinner.

I wasn't functioning on all cylinders this morning.

I put my computer in the car, the LCD projector, some honey and crackers for them to taste, a box to take to Colony Square after the talk, and my bee gear.  I drove 25 minutes to the meeting site, set up all my equipment (computer and slide projector) and then discovered that I had left my flash drive back at home with the whole talk on it in Power Point.

Luckily I had another talk actually saved on the computer that covered the topics, but didn't have the lovely bees on flowers pictures that I always take to garden clubs.   Despite all of that,  I think the talk went OK.  Then I drove to Jeff's to add a box to Colony Square.

We've made two splits from Colony Square and it is still bursting at the seams.  I got fully suited and lit my smoker and opened the hive.  This hive is so angry all the time.  Bees head butted me throughout the small intrusion.  I decided I should name the two splits from this hive (also angry bees even in their new location at my house) Spawn of Satan One and Spawn of Satan Two (SOS1 and SOS2).

All I did to them today was remove the top box (about 50 pounds full of honey) and add another box under it.  I took two frames of comb from Box #3 and put them in Box #4 in the center.  I put foundationless frames in their place in Box # 3 (see below).

With the addition of the box below the top box and with the two ladder frames in the center of the hive, the bees are supposed to build comb more easily.  In a hollow tree, for example, the bees start at the top and build down.  So putting the box below is a more natural way for the bees to build their comb. 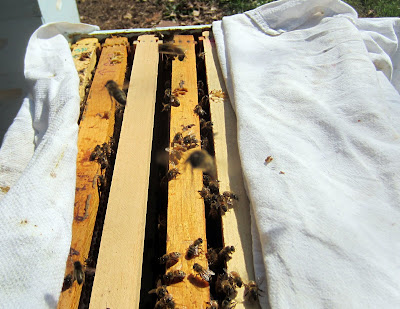 Bees were so in my face that all the photos I took were like the one below with a bee obscuring your view as she flew toward my veil in front of the camera! 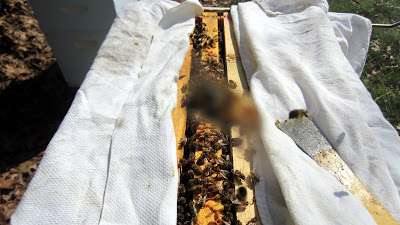 In the end I left Colony Square with FIVE boxes - it's only March - and met Julia at the Blue Heron (see next post).  If things continue to go well, this hive will produce a record amount of honey.  It was so difficult to lift that fifty pound box by myself into the top position.  The second they have capped that honey, we are harvesting it. 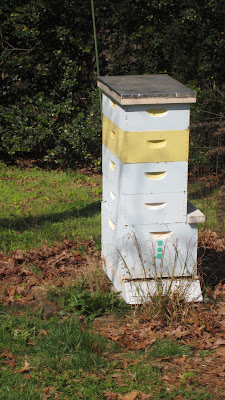 Jeff showed me a unique way to stop the air flow to the smoker and I employed it today.  We'll call it Jeff's acorn method: 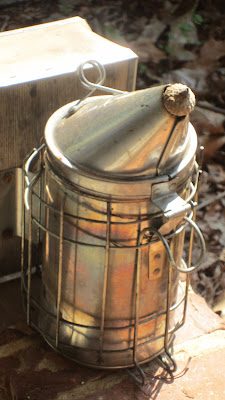