Today Jeff and I inspected the hives at his house.  We started with the small swarm hive.  On February 19, a month ago, I inspected this hive and found about a baseball sized clump of bees there with plenty of honey but no sign of a queen.

Today this hive was doing well.  We saw brood and eggs, honey both capped and uncapped and generally it looked great.  I didn't get it, because if they had made a queen from the frame of brood and eggs we gave them, she should barely be laying at this point. 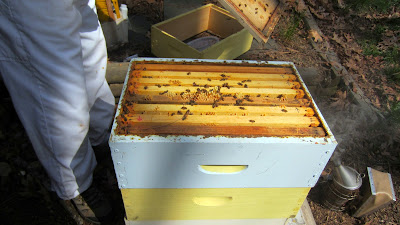 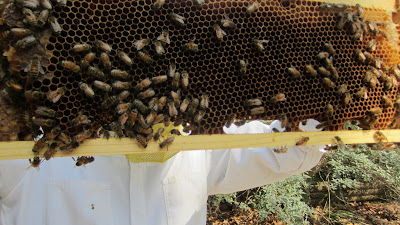 And here is a frame of capped and uncapped honey. 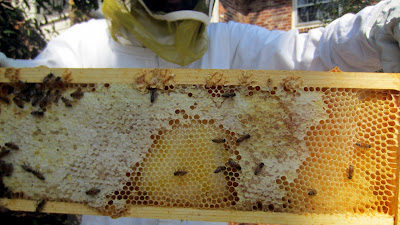 The hive was doing so well that we gave it a third box and moved on to Five Alive. 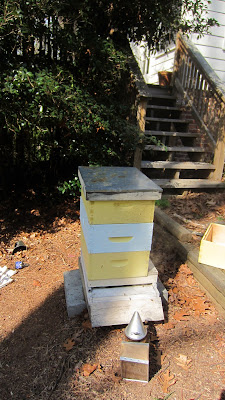 Five Alive had several frames of brood that looked just like this - solid worker cells capped and almost ready to emerge.  They had two full boxes so we gave them a third box and put a ladder of filled comb from the box below to help them get started. 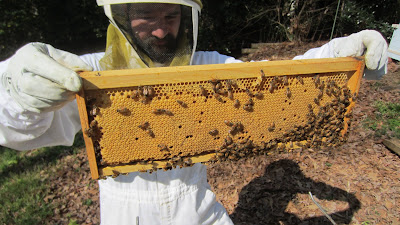 Then we went to Lenox Pointe.  On February 19, there was lots of brood in the bottom box as well as in the second box.  Since the bottom is a deep, we took a brood and egg frame from the second (medium) box to give to the swarm hive.

Today there was no brood in the bottom box and there was some honey and lots of empty cells.  In the second box there were seven frames of honey and the eighth frame was a new foundationless frame that I had inserted to replace the egg frame for the Swarm hive.  That frame was filled with honey comb now that was all drone sized comb.  There were eggs in most of the cells on this frame, but it will be all drone brood.

The third box was solid honey.  There was no space to build.

As I thought about it, here's what I think happened.  When we moved the frame from Lenox Pointe, we actually took the LP queen with that frame and she simply set up shop in the small swarm hive.  She is doing well and the hive is thriving.

Meanwhile LP made a queen with their eggs but because it was so early, the queen was poorly mated and is not doing a good job at the moment.  Since the queen seems inadequate to us (who knows what the bees think), Jeff and I decided to put a new frame of brood and eggs from Five Alive into this hive and see if they can make a queen.  This will effectively interrupt the varroa mite's brood cycle while the new queen is being made.

Meanwhile the frame of brood will provide enough pheromone to keep the bees happy and purposeful in that hive and we gave them another box so there would be somewhere for the current queen to lay or for a  new one.

We only opened Colony Square for a moment.  They too need a new box since their top box was filled with drawn comb and nectar.  I didn't bring enough equipment with me, so I will put a new box on CS tomorrow.  Here's what one of their beautiful wax frames looked like as it was getting started. 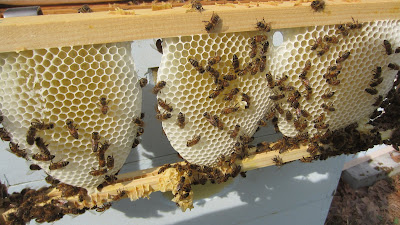