This morning there were still bees clumped in one of the flowerpots.  This makes me think even more that there is no mated queen.  But I set up the nuc with a Boardman feeder and the bees went into the hive.  I have no idea what to think of this swarm.  I can't check on it until Monday so hopefully they will have gotten their act together by then. 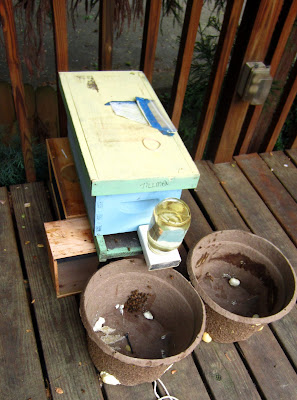 This little clump is pretty connected to the flower pot. 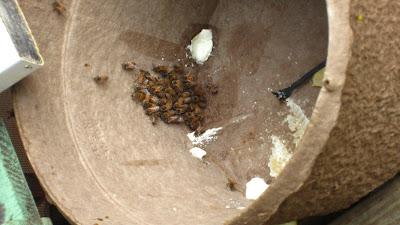 Another miscellaneous topic:  when you buy a package of bees, there are going to be a certain number of bees that die in transit.  This happens simply by the attrition.  In a hive a number of bees die everyday, but in the package, random bees have been shaken in together.  For some of them, their time is up in transit and they die.  In the particular package that I installed in this hive below, there were stacks of bodies on the floor of the package. 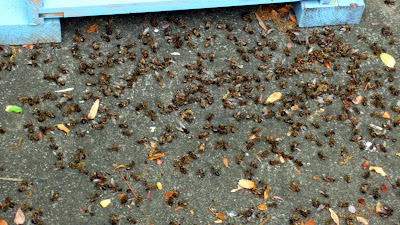 Bees don't like to have dead bees in their hive. So the bees quickly moved out the dead bodies. Compare the scene in front of the hive above with the small number of bodies on the ground in front of the other package hive installed the same day pictured below.  The package for the hive below had very few dead bees on the bottom of the package. 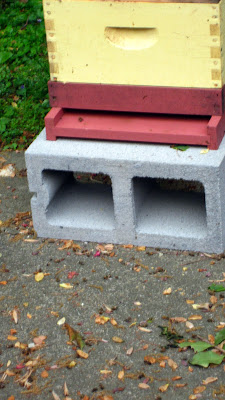 And the last miscellaneous bit, the tulip poplar is blooming in Atlanta evidenced by the bloom on the ground below.  This signals the beginning of the nectar flow in Atlanta - much earlier than usual.  Typically in Atlanta the tulip poplar blooms from mid April - mid May.  Now with everything blooming earlier, the question is how will the early spring affect the honey crop this year. 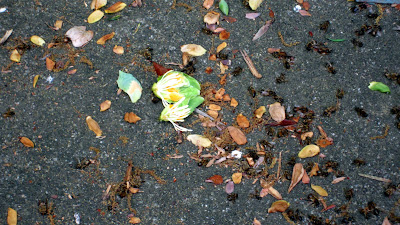