First thing this morning I went to pick up nucs from my friend Jerry Wallace.  He had a yard full of nucs waiting for the purchasers.  I loved chatting bees with Jerry and his father-in-law (also a member of our bee club).  Jerry put the nuts on this trailer to close up the entrance. 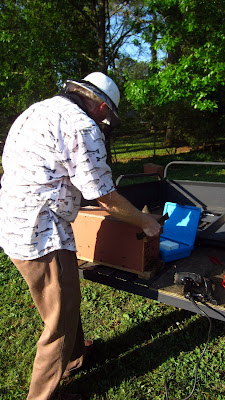 He sprayed the bees with sugar syrup to encourage them to go inside the nuc. Then he closed up the entrance with a stapled piece of screened wire. 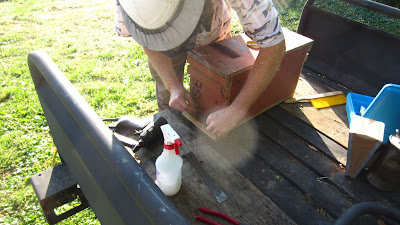 I took the first two to Sebastian and Christina's house.  I didn't expect them to be at home and nobody answered the door, but we had prearranged the installation, so all was well.   They had cut the grass and settled the hives into place.

I set both nucs on top of the hive they would occupy. 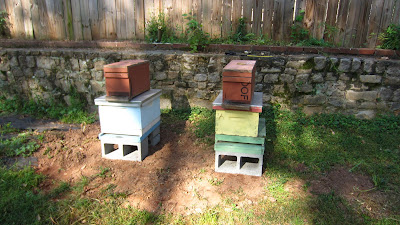 As I was opening the first nuc, Christina appeared from a dog walk and wanted to watch.  I didn't have a lit smoker - it was in the car - and I had already started opening the nuc.  She was sleeveless, but wanted to see the installation.

I had left the boxes set up with room for the five nuc frames. 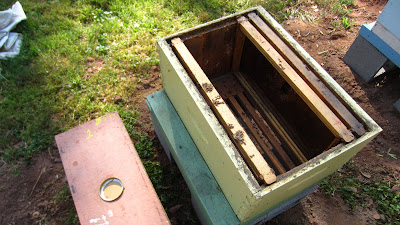 As Christina was taking the next two pictures, she got stung a couple of times on her face and bees were in her hair.  I hated that she got stung when her new bees had just arrived.  She had appointments all afternoon and now would be dealing with bee stings.

I had so hoped for a better introduction to bees for the two of them. 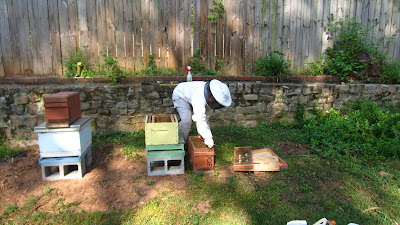 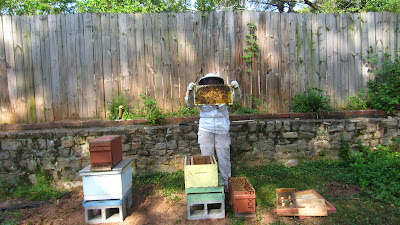 The bees in the first box were really feisty.  There were a lot of bees in the box, more than in the second nuc, and they had been cooped up for a while.  I didn't see the queen, but did see tiny eggs so we know she is there.

For the second box, I lit the smoker and had a smoother experience.  These bees were really nice and calm. 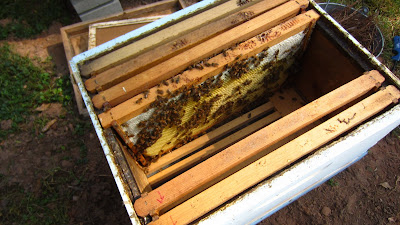 The brood patterns in this hive look great. 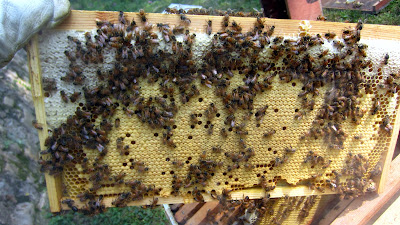 And I saw the queen.  She has a lovely yellow dot on her back - which made her easier to find. 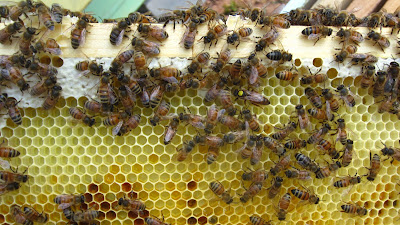 As always when you install a nuc, many bees remain in the nuc rather than going into the new hive.  I left both nucs standing on end so that the bees would go into the hive to join the others. 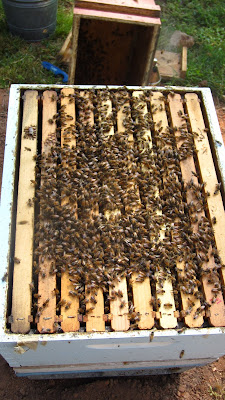 Here's how they looked when I left.  I didn't get to see Christina again before I left - she had gone - and I hope she is OK. 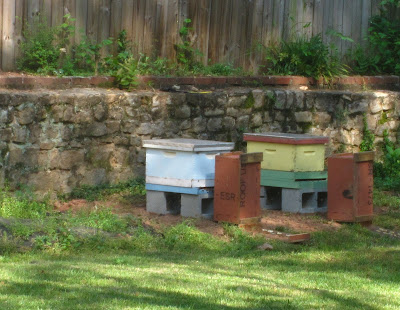