(Title thanks to my friend and fellow swarm catcher, Curt B)

Curt's bees all died over the winter, so our friend and beekeeper, Bunny, called Curt when her bees swarmed and offered him the swarm.  He asked me to help him and I jumped at the chance.

The swarm was really high up in a hemlock tree - I mean like 25 - 30 feet up.  We gained some height by working from the neighbor's yard.  You can see it in the tree top below in the center of the photo. 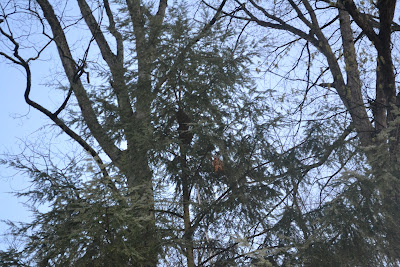 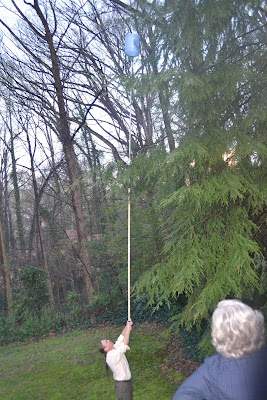 Curt borrowed an extending pole from George (this was a real team effort!).  George's pole extends much farther than mine.  Tom, Bunny's husband and fellow beekeeper, holds mine up and it is still about 15 feet short of the swarm.  Of course, at this point we hadn't thought of the neighbor's yard.

The first aspect of successful swarm removal is to follow the Scout motto:  Be Prepared.  I was woefully unsuccessful at this part, as you'll see.  However, the first thing we did was to position the hive box into which we planned to dump the swarm.

We set the hive box on a sheet in case we missed the box altogether and the bees would still be accessible.  We also put bungee cords under the box, ready to secure it and had a piece of screen wire ready to block the entrance. 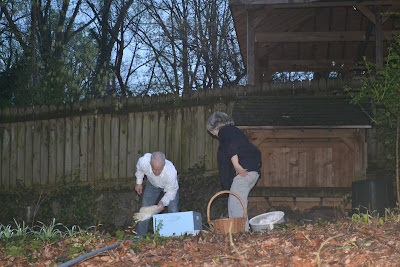 Then Curt did a practice run to see how he would move the water jug mounted pole after he got the swarm.  There were so many tree branches - it was really like maneuvering through a maze.  Don't the two of us look tiny in comparison to the length of that pole and the height of the trees! 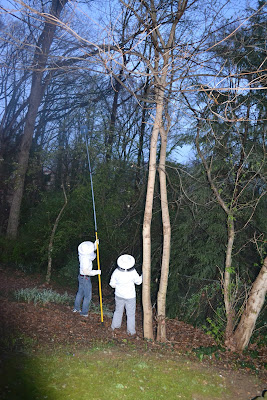 Curt was operating this incredibly long pole and the hive was high up a tree and across a fence from where we stood.  He positioned the water jug under the swarm and did the prerequisite quick movement upward to capture the swarm........and half the swarm went into the water jug and half fell 30 feet to the ground below, covered with leaves.

OK, remember how I said the thing about the Scout be prepared.....well, we missed thinking about a very important thing.  I put a sheet under the hive box, but did NOT have one on the ground under the tree. 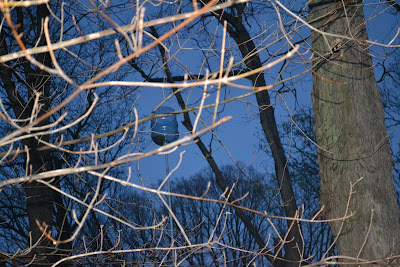 We still had to get the swarm into the hive box.  Curt's caption for the photo below is:
"Swarm Catching:  Iwo Jima Style".  His second choice was  "Moby Bee." 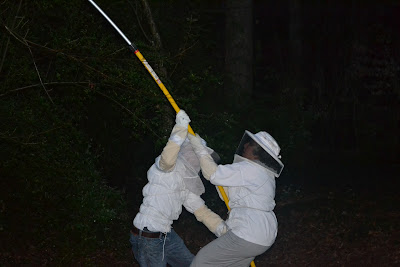 The water jug was surprisingly heavy and the tip of the pole bent and swayed awkwardly.  To put the swarm into the box, we had to turn 180 degrees from how we are standing in the photo and lower it.  What a challenge!  We both felt like circus acrobats trying to manage poles on a tight rope - what a hoot and what an adventure!

We returned to Bunny's yard where Curt gathered up as many bees as he could from the ground below the tree and also dumped those into the hive - if we had spread a sheet under the tree it would have been so much better......live and learn.  He was quite the trooper with bees crawling up his pant legs and stinging him left and right.

In the end we put the hive right beside the dropped bees on the ground so that perhaps they would join the queen *hopefully* in the hive box. 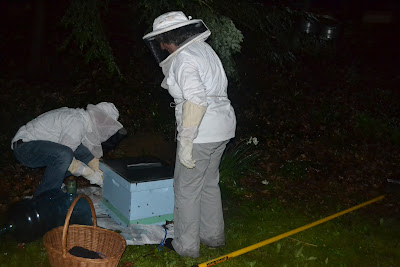 We left the hive until morning.  I drove over to Rosedale Road the next day and the good news is that the bees were still in the box.  I added frames to the box and Curt will go by to pick up the whole thing to take it to his yard.....

so thanks Curt, Bunny and Tom for a great time and a good story! 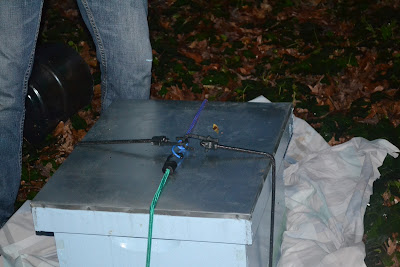 Note:  Bunny took all of these great pictures - thanks for letting me use them.
Email ThisBlogThis!Share to TwitterShare to FacebookShare to Pinterest
at 12:21 AM
Labels: swarm collection, swarm trap