Cindy Bee who belonged to Metro Atlanta Beekeepers when she was in Georgia once said that when people called her about a swarm, she would  ask how big it was.  She'd say, "Big as a basketball? A football? A baseball?" but people would say, "Well, it's as big as my Mama's purse;" or "It's as big as two cats."

When I got this tiny swarm, I thought, "Only as big as a kitten."  So I housed the tiny swarm in a nuc box to help them thrive.  Since it was so small, it was probably a secondary swarm with a virgin queen and she needed time to mate and start laying.

I looked into the hive for the first time on Wednesday.  They have a laying queen!  She had an egg in almost every available cell.

I am feeding this nuc, unlike my other hives.  I feel like mothering it - they are so small and I want to make it work for them.  Maybe they won't make it, but I loved opening the nuc and finding all these eggs.  And they were storing nectar. Notice in the comb below that they have left themselves a passageway right in the center of the comb.  This is one of the advantages to the bees of foundationless frames. 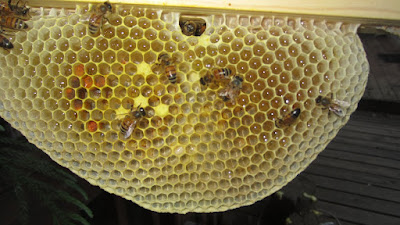 The bees only occupy part of three frames of this nuc, but Michael Bush once wrote on Beemaster that at this time of year, if he had a group of bees about the size of a baseball (or a kitten), he would try to give them every chance.  That's what I'm doing. 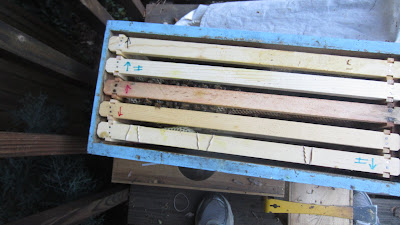 And now that they are making a new home in the nuc box, I hung the swarm trap back up again.  It may have already used its 40% chance by catching the "small kitten" but I love it that it worked and want to try again! 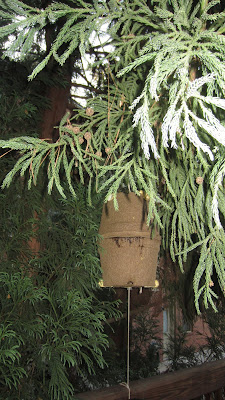