Lark, my 2 1/2 year old granddaughter, loves the Jez Alborough book, It's the Bear!  She knows it by heart and her favorite line is: "Out of the woods stepped a big, hungry bear, licking his lips and sniffing the air."

Last night I gave a talk on Low Tech Beekeeping in Pickens, SC and since it was too far to drive back to Atlanta afterwards, I drove to Rabun Gap to my mountain place.  I got here around 10 PM.  I planned to go to a plant nursery this morning, so last night I took all of my bee stuff out of the car, including my show and tell for the speech.  I put it all in the carport and went to bed.

Some time after that, "out of the woods stepped a big hungry bear, licking his lips and sniffing the air."  I guess he was drawn by the smell of the honey comb lure in my flower pot swarm trap.  This is what the trap looked like this morning: 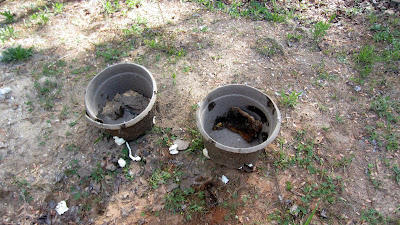 The bear had ripped it apart and torn off the bottom of one of the pots in an effort to reach what he smelled - I assume my honey comb lure. 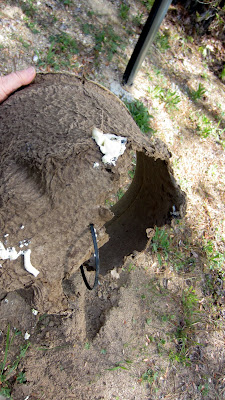 So I guess the swarm trap attracts bears as well as bees!  How effective can you get?

And the dogs and I slept through the whole thing, happening just outside the house. 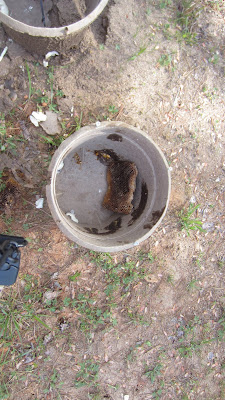 Not only that, but the bear rifled through my bag of other items and pulled out the ziploc filled with balls of wax (for demonstrating how to use the solar wax melter).  The bag was ripped and the balls of wax reduced to crumbs! 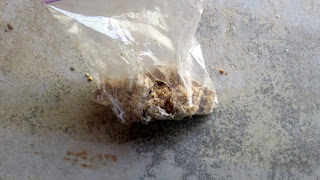 Lesson learned.  If you don't want a big hungry bear to step out of the woods, licking his lips and sniffing the air, don't leave anything in the carport to lure him/her!