Hives at Jeff and Valerie's House

Jeff and I have thought that Colony Square is queenless.  They have not stored much honey in a few weeks and we haven't seen brood/eggs.  However, it's a rather vigorous hive and we haven't gone into the lower boxes.  We decided this past Sunday to explore until we found evidence of a queen or lack of one.

The hive is one deep (this hive began as a Jennifer Berry nuc last year) and five medium boxes. 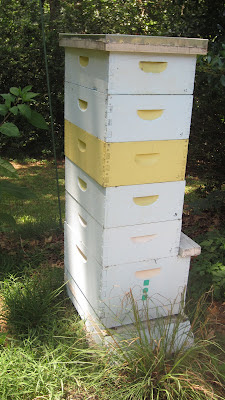 These hives are Jeff's responsibility, so I am just there to satisfy the question: is there a queen?  He wanted to do the work (and the lifting, thankfully!) 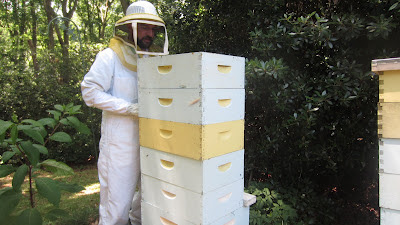 We went down to box four where we found brood frames that only had a few scattered capped drone cells.  There were many empty uncapped worker cells.  This means that the queen last laid eggs more than three weeks ago.  The drones, which take 24 days to emerge, would be the last capped cells left.

However, the hive was pretty calm and there was no queenless roar.  More than likely they have already taken care of the problem and made a queen who either hasn't emerged, hasn't gone on her mating flight or hasn't started laying yet.  We went all the way down to the deep box and didn't see capped brood other than drone cells. 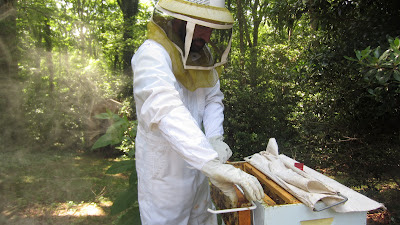 We decided for insurance sake to add a couple of frames of brood and eggs to Colony Square to give them a way to make a queen if they are still in need.  Although they have not collected much nectar in the past few weeks, there are three boxes on the hive for us to harvest - and the disruption of the brood cycle will be good for any varroa problems.  It takes a hive 42 days to get back to full production when they make a queen. 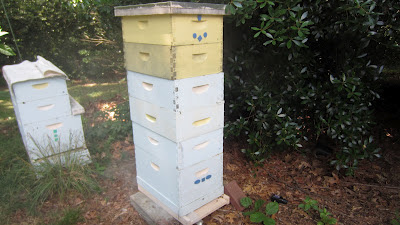 We decided to go into Lenox Pointe to get frames of brood and eggs.  We found lots of capped honey and some beautiful wax (see below). 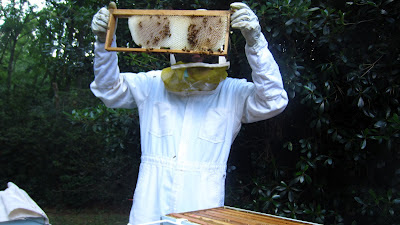 In taking out the frames, some comb was opened.  The bees below are trying to repair the damage as quickly as possible. 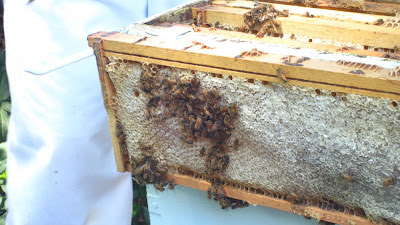 We found brood - but most of it was in honey frames so we decided to get our transfer frames from Five Alive - our most vigorous hive.

We opened Five and took two frames of brood and eggs and put them into Colony Square.  We put CS back together.

Meanwhile, Five Alive which had eight medium boxes on it, was desperate for a new box.  Jeff added the new box (the blue one) below the top box and we moved honey frames from the box below up to the new box to serve as a ladder.

The top box was completely full of capped honey.  It took all his muscles to get the box onto the top of the now nine-box Five Alive hive!  Jeff posed to show his muscles after the event! 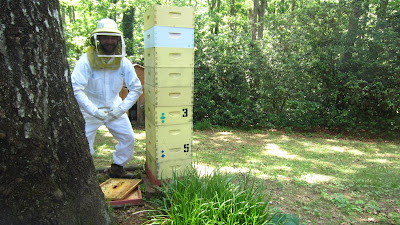 The hive is now almost as tall as Jeff who is six feet!  We must harvest from this hive.  Our plan is to harvest on June 2 from Five Alive, weather permitting.  This is my seventh year as a beekeeper and the best year ever as far as productivity is concerned.

FWIW, this hive began as a package from Don in Lula, Georgia; survived the move from the south Georgia farm almost exactly a year ago; and survived the winter, although there was only a tiny number of bees as February arrived this year.  We actually thought it was dead (thus its name: Five Alive). 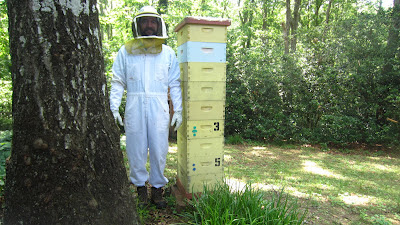 Email ThisBlogThis!Share to TwitterShare to FacebookShare to Pinterest
at 12:18 AM
Labels: adding frame to queenless hive, honey, queenless