Musing about Frames: The Importance of the Tenth Nail, Sturdy Waxing, and the Availability of a Handy Toothpick

Lots of people purchase their frames pre-assembled.  I am not one of those people.  However, I am certainly rethinking this - it takes me 50 minutes to nail together 10 frames using a jig - not very fast, although the jig really helps.  The jig is set up for 10 frames, so when I went through the process three times, I've completed enough for three boxes (but since I use 8 frame boxes, I actually almost have enough for four!)  Waxing frames in takes time too.  This morning I spent one hour cutting and waxing strips into about 50 frames.

Are you listening, those of you who only bothered to use eight nails?

The tenth nail is the hardest to drive in and makes me say, "*#^#$^)%(#$)," almost every time  However, it is by far the most important nail.  That nail and glue make all the difference in frames that can stand up over time.  The tenth nail is the one that takes me the longest.  I can hammer all eight into 10 frames in 30 minutes.  Then it takes me 20 more minutes to hammer in that $(*)@#*$**^ ( tenth nail into either end bar of 10 frames. 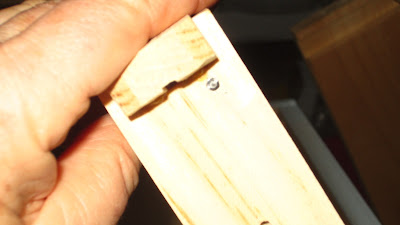 If you don't hammer in the tenth nail (or use glue), the sight below is one you might see.  This is a medium box of honey, but I won't be able to harvest the second frame.  The top bar has become unattached from the end bar and I won't be able to get it out of the box.   This is a frame from 2007, so it is in its fifth year of use (new comb every year), but the parts are wearing out and maybe I skipped the 10th nail at least on this end of the frame. 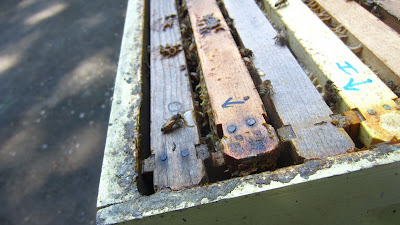 The frames for the hives at Stonehurst don't have the tenth nail.  I am not in charge of constructing the hive parts over there. I picked up the constructed frames the other day and brought them home to wax in strips.  When I noticed the lack of the 10th nail, I suppose I could have nailed it into place.  It's my nemesis however, so instead  I've decided that if one of the frames over there comes apart like the one above, I'm simply skipping it in the harvest.  And if we order any more frames for Stonehurst, I'll do a better job of educating the guy who is building the hive parts. 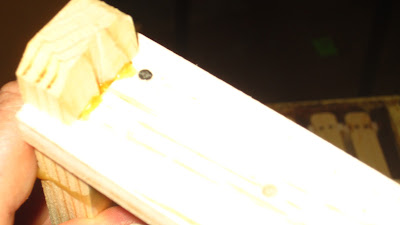 When I've given talks about using foundation less frames, I've had beekeepers I respect tell me that they have had strips fall out of frames in Hotlanta weather.  That has never happened to me.  I wonder if perhaps those beekeepers are not waxing in the strips well.

Here's where the handy toothpick comes in (you were wondering, weren't you?).  Sometimes the wax tube fastener looks like it is releasing wax when it isn't really.  Then I take a handy toothpick and unplug the hole in the handle.  Wax flows out easily then and I can make sure the wax strip is being secured on both sides.

One thing I've noticed in using frames from previous years when I have cut out the old comb:  If the old comb I cut out was crooked cross comb, then the bees with the now empty frame, follow the old cell lines and build crooked comb again....even with just a one cell depth of wax left on the frame.

Going forward when I cut out cross comb, I am going to use hot water to melt the old crooked lines off of the top bar and insert a new wax strip.  I may have to put such old frames into a boiling water bath so that the bees, in trying to color between the lines, crooked though they may be, won't have the old lines to use.

Note:  There's a video on this site about how to build a frame.