Inspecting Hives - This and That

In the blue hive there were only six undrawn frames total in all the boxes.  I might not be back for about 10 days, so I put a new box on that hive.  However, now I am out of 10 frame medium boxes, so I put an 8 frame on the hive and covered the extra two frames below with a 2X4 (see the hive tool sitting on it?). 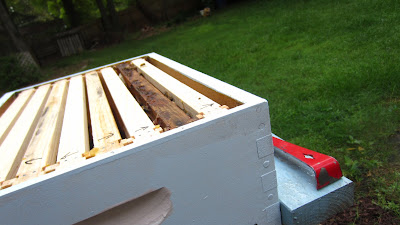 This year in every location I am finding earwigs on the hives.  Generally they are located like these are around the top edge of the hive often outside or on top of the inner cover.  Wonder what the appeal of the bee hive is for the ear wig?  They eat arthropods, plants and ripe fruit and they do like small tight spaces which does describe the bee hive.  Whatever the appeal, they are in all of my hives this year. 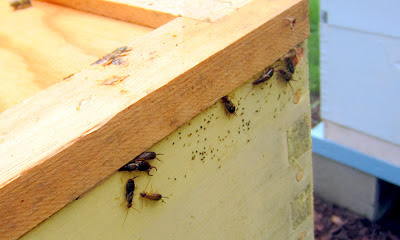 Then I went to Stonehurst Place.  It's an interesting group of hives.  We've had rain and cooler weather for the last week, so the bees have not been able to forage and the tulip poplar is almost done so there isn't much nectar to be had.  The two new nucs at Stonehurst this year are moving slower than my other nucs.

In the first hive I took this picture of new comb filled with nectar.  I love it that the bees immediately use wax as they draw it.  They will continue to fill this frame but are storing the nectar as the storage are is created.  Even more fun is to find comb that is a niblet hanging off of the top bar of the frame, but is already filled with eggs from the eager queen! 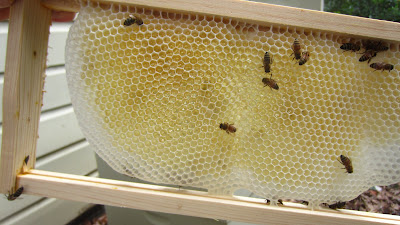 The second nuc at Stonehurst swarmed almost immediately after installation.  However, their new queen is laying and doing well.  If you click on the photo below, you can see an egg in almost every cell.  She is trying to catch up.  However, swarming is almost a guarantee in a new nuc that we will not get any honey from this hive this year.  They will need whatever they store to make it through the winter. 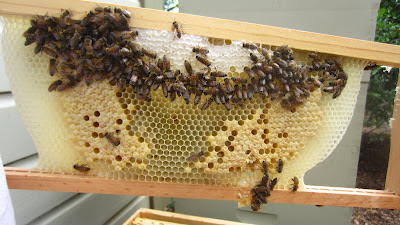 Talk about a bee yard that needs equalizing!  The overwintered hive is full of honey - the bees were unhappy with me because they are in such need of space.  I had no help with me today and no ladder so I simply added a box to the top of this hive. 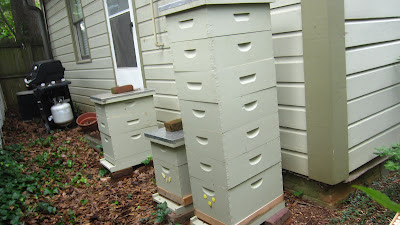 In the hives at Morningside, I'm finding the same phenomenon that is occurring at Sebastian and Christina's.  These hives at the community garden were started from packages on the same day.  The hive on the left is smaller and has fewer bees than the hive on the right.

Both have active laying queens and appear to be storing nectar, laying eggs, and generally going about their bee business.  Differences in hive size may be the result of the queen, but it also may be the result of drift (bees coming back to the wrong hive).  These hives are different colors and have different markings on the front, but to further address this potential problem, I added stick-on flower designs to both hives to increase their distinctiveness for the returning forager bees. 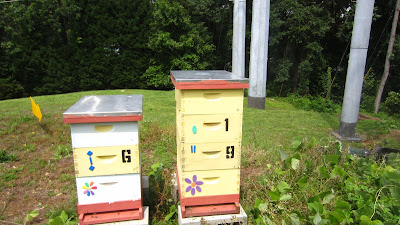 Email ThisBlogThis!Share to TwitterShare to FacebookShare to Pinterest
at 8:49 AM
Labels: earwigs, Morningside, Stonehurst