Not the Best Bee Day - Zia in Jeopardy

Today I went through my hives in my backyard.  My friend Julie's husband, Seth, who used to keep bees in 1989 and wants to get back to it, came over and went through the hives with me.

We've had rain and cooler weather over the last ten days or so.  And the nectar flow has about stopped.  So I didn't expect much.

We found roly-polys under one hive!  There were also earwigs, I saw one roach, and I smashed three large wax moth worms. 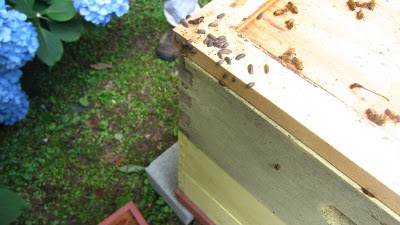 It's the scheduled week for powdered sugar every four days, so I started today.  The bees were not pleased with my effort to keep them healthy! 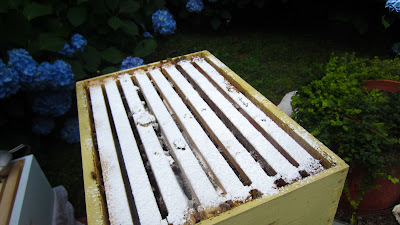 I only added a new box to one hive (below).  I did shift around some of the top boxes to encourage the bees to build a little more.  I also, to account for drift, add some identifying markings to all the hives. 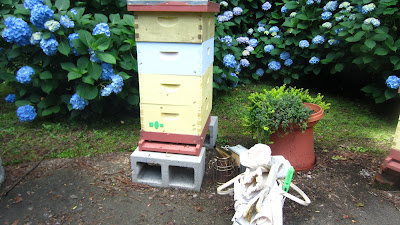 Below is another hive that I shifted the box positions. 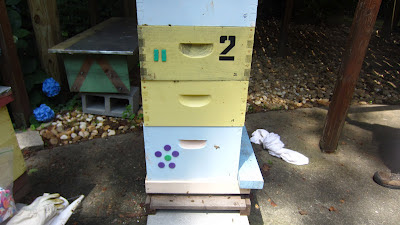 I don't have photos of the bad part of the day.  We went up to the nuc housing the Little Kitten swarm.  I know not to open or go through it for three weeks after installing the new queen (the Zia queen) but I hadn't pulled the queen cage and wanted to get it out.

We opened the top of the nuc.  The bees are quiet and calm - there are lots of them thanks to the nuc I created a week ago.  There between the frames was the queen cage, with the queen still inside.  The bees weren't attacking the cage or biting it.  The queen was not released but was alive and seemed vigorous.

That's when I did the stupid thing.  I thought, "At this point I should direct release her."  So I opened the cage and she walked down into the rest of the bees.

THEN I thought, "Wonder why they hadn't released her…..could there already be a queen in this hive?"

Too late to retrieve her majesty.  I guess I just cross my fingers that they accept her and life is good rather than my other thought which is that there is a competing queen who will kill Zia on sight.

And how will I know later what queen is in the hive, if there is another queen already present?  I can't say, "Will the real Zia step up."  I have no idea what she looks like compared to any other.  I guess I can add this to the growing long list of my bee mistakes………….