Signs of the diminshing Nectar Flow

In Atlanta our nectar flow is tied to the bloom of the tulip poplar.  When the tulip poplar is done, the nectar flow is pretty much over.  We will continue to have nectar sources and we always have a little bump in the availability of nectar when the sumac and catalpa bloom in late June/early July, but for now, it's over.

This has been a funny spring.  Everything is two weeks earlier than last year.  The privet hedge bloomed in coincidence with everything else, and it will be interesting to see how that flavors the honey.

If I couldn't look up in the tulip poplars above my backyard and see that the bloom is done, I could tell that the nectar flow is over by the behavior of the bees.  They are still primed to collect nectar and disappointed that it has almost suddenly stopped.

They indicate that it is over by collecting honey wherever they can.

I had the two frames below sitting under my deck since January when I discovered that my hives in my backyard had died.  These frames had been somewhat slimed by the small hive beetle and the bees ignored them…….that is, until today.  Today there are bees robbing out these two frames like crazy. 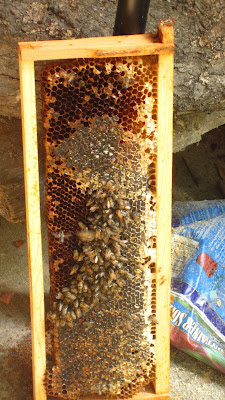 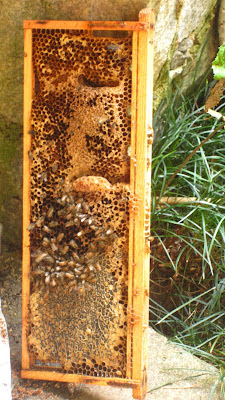 Also I have lots of wax under my house cut out of frames and waiting for Jeff to build us a bigger solar wax melter.    Some of that had remnants of honey in it and you can see bees all over the comb in the foreground. 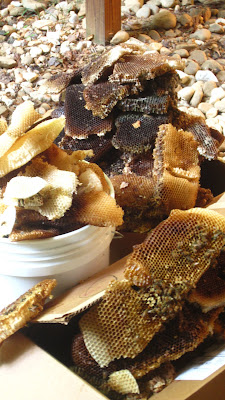 Another way to tell that the nectar flow has ended is that the bees have slowed down in building comb.  Whether you use foundation or not, when the nectar stops, the bees stop drawing wax.  They have to have resources to build wax and without nectar, they have no fuel.

When you have foundationless frames, it's quite obvious as you can see in the empty hive box below from Morningside.  If you use foundation, there's an illusion that something is going on because each frame is full (of plastic foundation, that is) but in those boxes as well as my foundationless boxes, NOTHING is happening in Atlanta today. 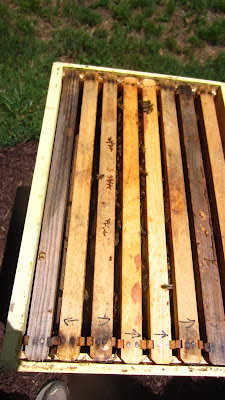