Before going on vacation this past week, I went up to Rabun County to check on the bees on June 6.  Both hives had bees but both were WITHOUT honey.  They didn't even have honey on the corners of the brood frames.

I had read in the The Macon Beekeeper (the monthly newsletter of the bee group in Franklin, NC) that there was little nectar in the area - here's the quote:


"Reports from all over indicate that at this point the honey crop is a failure. With one exception beekeepers report that their honey supers are, essentially, empty. A few are feeding their bees to hold off starvation.
It’s no different here. The tulip poplar did bloom. I do see some dark nectar in a few colonies. However, in reality, the nectar flow did not happen. My bees continue to work, and they are not starving. But there is no excess honey. It’s hard to take, but that’s agriculture."

My bees are about 10 miles south of Otto, NC, which is the area referenced in the above quote, so I'm not surprised, but sad to find that they had eaten through earlier honey stores.  That's just the way it is.

Here are the bees from the surprise move-in swarm hive happily (or not) entering their hive. 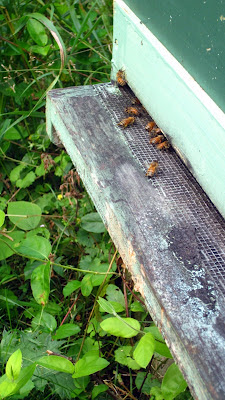 Note the corner of this frame by my thumb - NO honey for the brood. 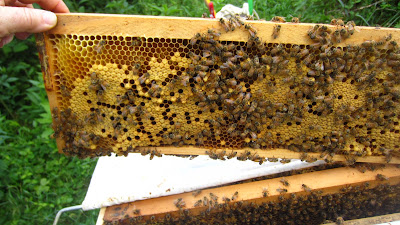 I did see nectar on a few frames.  The sourwood was just starting to bloom when I was up there on the 6th.  My house up there is on a mountain of sourwood and the trees each had a few blooms.  My bees are at the Rabun County Civic center and not at my house, but they may have found some blooming sourwood to put the nectar in these frames. 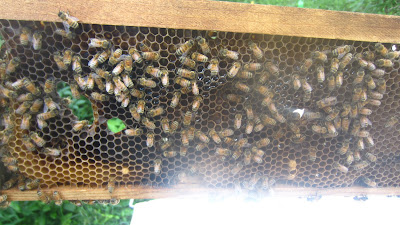 This hive with five boxes on it had two full boxes of capped honey when I was here at the beginning of May.  Now they are empty. 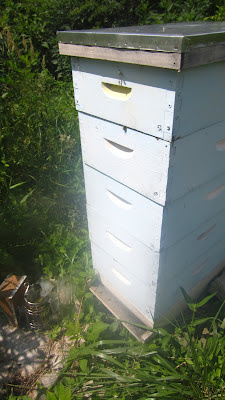 Another sign that they may be finding a little nectar now is that they had begun building beautiful wax on this frame.  Just a little, but it takes nectar to do that. 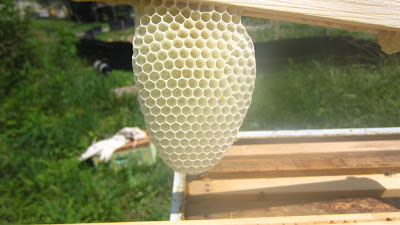 The hive seemed listless, though, and the population was down although I saw eggs in both hives so I know the queens are OK.  The queen won't lay more eggs than the bees can support, though so she may have slowed down. 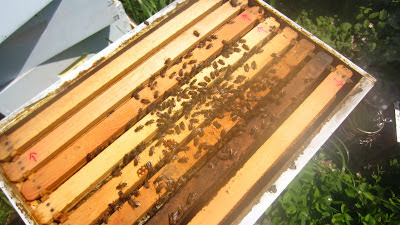 There are eggs and young larvae in the frame below. 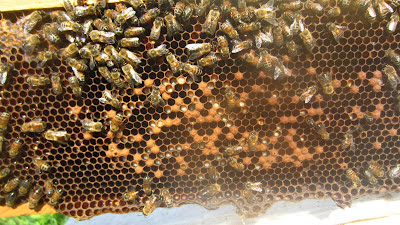 Again, here's a little capped honey and some nectar being stored now.  Since the sourwood flow is starting, I took one box off of the tall hive and left them with room to store sourwood.  I didn't change the configuration of the surprise swarm hive, so their house is like it was the day they moved into it. 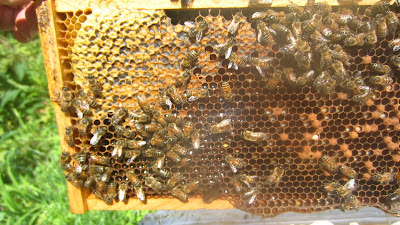