I've pretty much been gone for the last two weeks.  First I went to Key West with my youngest daughter and her family for the second week of June.  I was home for two days and then left last Wednesday to go to Norfolk, Virginia for a psychology conference that lasted until Sunday.  So my bees have not had attention for two weeks.

Before I left I checked all of the hives, somewhat giving them each a quick once-over, but not a deep inspection.  I didn't look at the top bar beyond watching to see if bees were flying in and out….which they were.

Today all the hives had bees flying, but not the Top Bar.  I flipped off the top and found absolutely no bees…..no bodies, no larvae, no bees at all.  Every cell was empty and the wax moths were already going to work.  I pulled out all the bars and set them in the sunlight so the wax moths would not thrive. 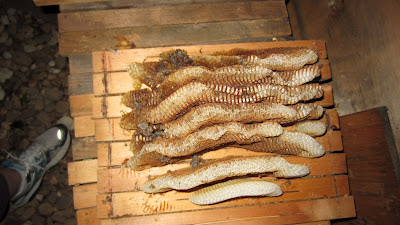 This hive was tiny.  It started from a small swarm I captured in Decatur and then recaptured in my front yard.  I installed it into the top bar on March 25.  By March 25, the nectar flow here was almost over and they never built up well.  These combs are all they had built. 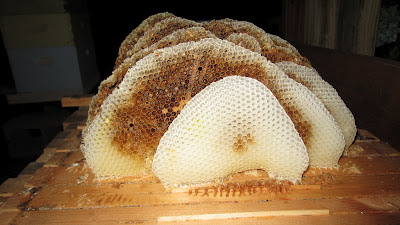 In the photo above I can see a few left capped cells so I'll look at them tomorrow.  What I imagine happened was that the hive failed to put up enough supplies and absconded out of desperation as bees sometimes do here in Atlanta in August….but this year August has come sooner.

I am currently teaching communication skills to the doctoral PT students at the Emory Med School.  Every year I tell them that it's important to be aware of whatever biases or judgmental thoughts they may bring to their relationship with patients because it will affect how they care for the patient.  I tell them that if they have a negative sense of who the patient is, maybe they'll realize it because they'll find that they are giving less good care to that patient or attending to that patient less than patients whom they like/respect more.

I should listen to my own lesson.

I have had a bad feeling about the top bar hive.  Once again the bees built crooked comb and I felt a little angry and betrayed that here, my second attempt to have a successful top bar hive, I was failing again.   I had said that if I had only had the hive in my own yard last year instead of at Jeff's, perhaps the hive would have done better.

Well, this hive was in my own backyard, but I treated it neglectfully.  I hadn't really opened it in about a month and didn't enjoy working on it, so it often took a back seat to the other hives. 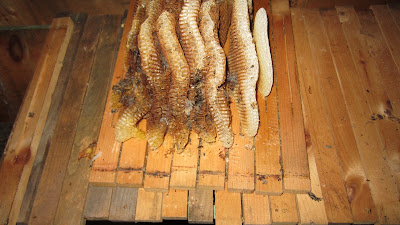 How would I have managed it better had I inspected to see about the state of the hive?  Maybe if they were without stores, I would have fed them.  Beyond that with only one top bar hive, I really didn't have many other choices.  I couldn't move a frame of brood and eggs into the hive to increase the worker force without another top bar from which to borrow; I couldn't share honey from another hive since the rest are all Langstroths.

I do hope they didn't leave and die somewhere (which is highly likely), and all I can do is vow to try to be a better beekeeper for the rest of my tiny charges.