A couple of weeks ago when I went to Asheville for the Natural Beekeeping meeting, I stayed at my house in Rabun County.  On the way up I saw the bear in the misty rain at Black Rock Mountain Lake.    The day after the conference, the lake was sunny and beautiful and while I didn't see a bear again, I did see Joe Pye weed and goldenrod, evidence of the fall flow (for what it's worth). 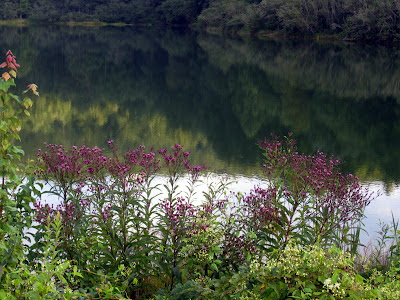 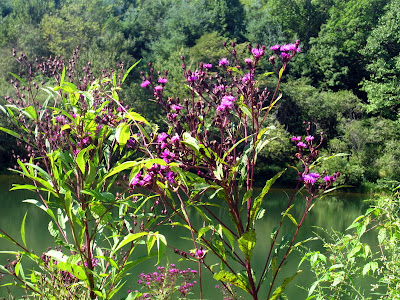 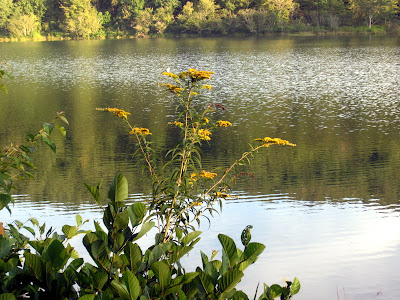 Before I drove back to Atlanta, I checked on the Rabun bees.  The last time I was up at the mountain house, I discovered that one of the hives was almost dead and had small hive beetles all through it.

I didn't really check out the cause of the problem when I was there before because I was so upset, so I opened the hive on this visit and brought the boxes back home.  Clearly the hive had been robbed out, and left so weakened that the small hive beetle took advantage of the opportunity. 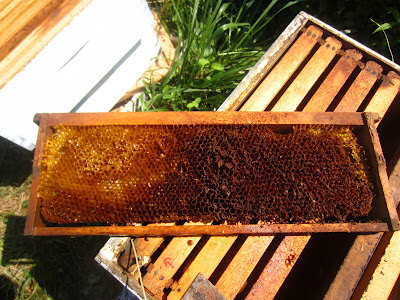 Two things are evident in this picture.  The edges of the cells are ragged, indicating a robbery.  There were dead bees littering the ground in front of the hive.  And you can see the slime of the small hive beetle.  I brought four boxes back to Atlanta and could hardly stand the sicky sweet smell in the car of the SHB's destruction.

The other hive was almost completely covered with weeds.  It was totally in the shade and had kudzu and other brambles all over the entry.  I didn't take a before picture, but I wish I had.  The bees were still flying happily in and out of the hive.  I knew this vegetation situation was likely so I brought my hedge clippers with me.  I went to work and freed the hive from most of the vegetation. 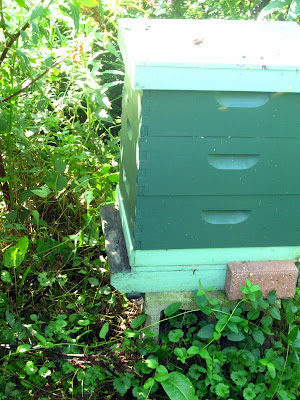 When I opened it, I was shocked (in all the previous shade) to find that I only saw one small hive beetle in the hive.  Perhaps they were all satiated on the frames from the other hive?

This hive has honey in all three boxes and brood in the bottom box.  I really wanted to taste their honey.  The top box is likely sourwood, but they had not completely capped the honey in those frames, so I brought back a frame from the middle box. 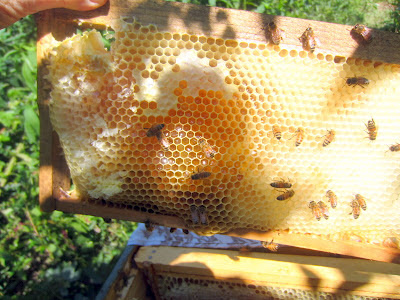 I didn't come prepared for harvest transport, so after brushing off the bees, I put the frame into a pillow case (I'm now using them for hive drapes like Julia taught me), and brought it back to Atlanta.  I crushed and strained it and now have three pounds of luscious grape-flavored honey, likely from the kudzu all around the creek bed where the hive is located! 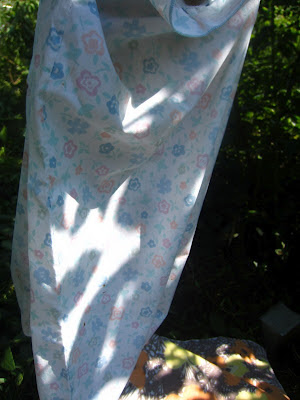