Sorry for the Radio Silence

In my real life, I have two jobs in the summer - my usual job and in addition I teach in the Emory Med School, teaching communication skills to the doctoral students in the Department of Rehabilitative Medicine.  I've been drowning in grading final exams and videos, and thus off the air for the last couple of weeks.

I'm going to post some activities from the last month to catch me (and you) up, and now that the semester is over, I'll get back to blogging about my bees.

A couple of weeks ago I went to check on the Morningside hives and found them hidden by tall grass.  The community garden is on land owned by Georgia Power and they usually do the maintenance, but someone apparently dropped the ball and the grass hadn't been cut in forever. 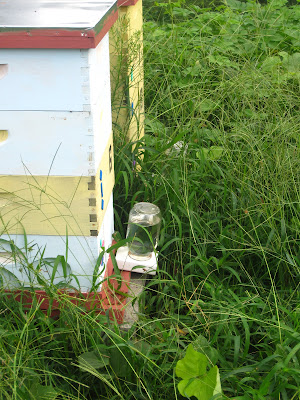 I had recently been up to Rabun County where I had to cut the kudzu off of the hive so I had in my car some hedge clippers.  So I grabbed them and instead of doing bees, I did landscaping. 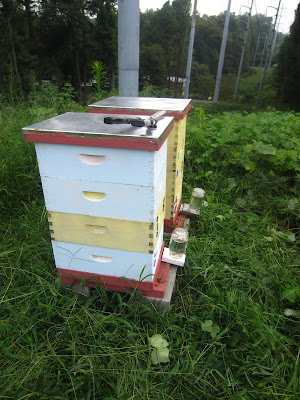 Now I and the bees can see their front doors.  I have Boardman feeders filled with water on the hives to keep the bees from going to the neighbor's swimming pool.  Who knows?  They probably like the chlorine better, but at least I am demonstrating an effort to keep them away!  The hedge clippers are on top of the closest hive. 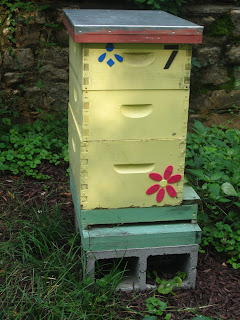 Then I went over to Sebastian and Christine's.  I didn't post about it, but one of their two hives was robbed out.  It was sad and I assumed the hive that was beside it, which was also the stronger of the two hives, had done the robbing.

I opened this hive to see the spoils.  Instead I found bees that were doing fine - lots of brood and bees, but very little honey.  I went all the way down to the bottom box to see what I could see and found little nectar.

That was two weeks ago and the asters and goldenrod have begun to bloom so maybe they will bring in some nectar.  I also have some honey that I can feed them. 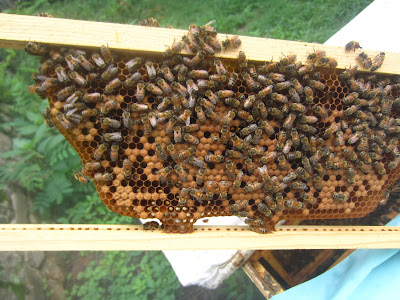 You can see in the photo above that there is lots of brood but no honey in the corners. 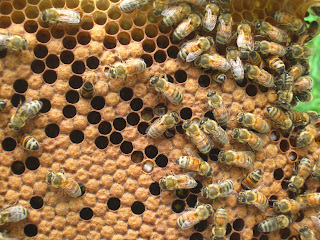 In the bottom box which is a deep (this hive started from a nuc this year), I found Her Majesty, walking regally over the frame: 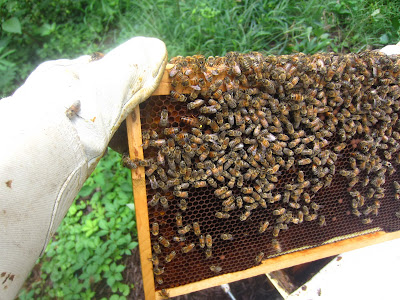 I don't usually wear gloves but a bee stung me on my right hand and I threw on a glove so I could finish up.  The queen is marked with a yellow dot and is in the upper left corner of the frame.  So this hive MAY make it through the winter if they can gather some supplies in the fall flow (which in Atlanta is generally minimal).