Well, the first pour was cracked in both blocks.  The second pour of two blocks last night resulted in two cracked blocks.  I was so disappointed.  Since the GBA honey contest is Saturday, tonight is really my last opportunity to succeed at this unless I pour a block during the day tomorrow while my grandkids are napping.

Generally a cracked block means that there was uneven cooling, but sometimes there's no explaining it. I had done almost everything I know to do, so I decided today to buy new pans and try with them.  I went to Target and bought two bread (loaf) pans to give that a try.   One is glass.... 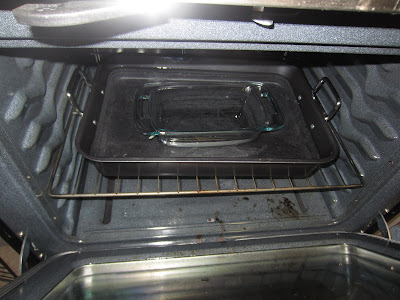 The other is no-stick metal: 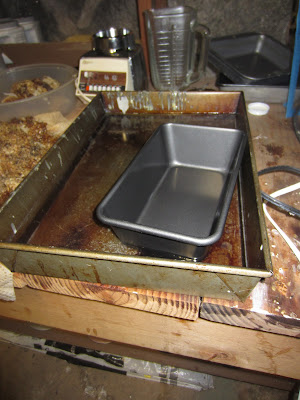 I heated the measuring cup in a pan of hot water and melted the wax in my converted Presto Pot.  I have some silk that I use to filter the wax.  So what happens is:  The wax melts in the Presto Pot.  I rubber band the silk over the large measuring cup (and 8 cup measure).  Then I pour the wax through the filter into the hot measuring cup.

When the wax has filtered through the silk, 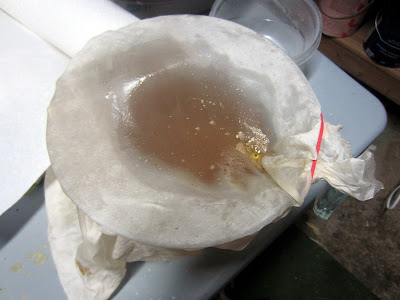 I carefully remove the rubber band and the silk (so that the filtered debris doesn't fall into the hot wax).  Then I pour the melted wax into the mold.  I put panes of glass on the mold after I've filled it so that the block won't have a wavy surface. 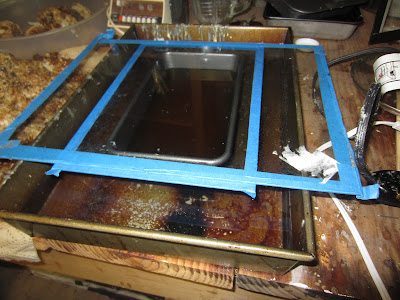