Last weekend was the fall meeting of the Georgia Beekeepers Association.  I went because the speakers look better than in any previous year I remember and because I am on the board.  The most interesting speaker was Carl Chesick, Director of the WNC Center for Honey Bee Research. 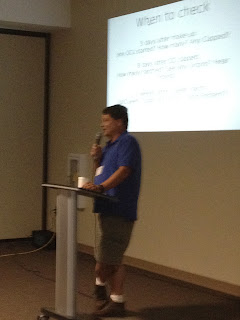 Carl was focused on sustaining bees that can outlast the varroa vectored diseases.  He said that in Asheville and the Asheville area, his center was encouraging everyone who has an untreated hive that lives through the winter to split it in early spring.  This is a fabulous plan and one that is in some ways obvious.

I, however, keep hearing that we should be supporting survival stock, and hadn't exactly understood how little ole me would be instrumental in that since I am not a queen breeder. But Carl pointed out that a split and a new queen that results is in fact breeding (a) queen on a very small scale.  Duh! But I hadn't registered this thought.

It's basic math, though.  If I have a hive that lives through the winter, untreated and only fed honey, then in the spring, I split it.  I have doubled the number of hives in my yard that are survivor bees.  The bees in that hive are strong enough to live WITH the varroa and not be defeated by the varroa.  If everyone did that, imagine how quickly treatment for varroa would go away.

Basic split involved in this:

In three weeks, the new queen should be emerged and laying.

Carl's talk followed a talk in the morning by Kefyn Carley from WNC University.  Kefyn's main interest is in spiders and mites, but after his talk I wanted to scratch my eyelashes.  He said mites are necessary and EVERYWHERE (even - read that often - in your eyelashes)... 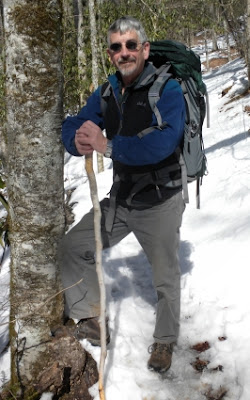 To do that, we have to recognize that if the parasite (the varroa) kills off its host, it will die as well, so it behooves biology for a mite to develop that can co-exist with its host.

It will take from 6 to 12 years to get mites and bees that can co-exist together and neither kill the other off.

So after hearing him talk and then hearing Carl, I am determined to get my bees to live through the winter and then split them!