Pests in the Hive - Ants and SHB

One of my hives at Stonehurst is the subject of a UGA study (along with a number of other beekeepers' hives).  The researcher came last week and emailed me that he thought the hives were so infested with SHB that they would not survive the winter.

I went over today with the only small hive beetle trap I could quickly find that didn't need an Imrie shim.  It was an AJ's trap.  I recently won two beetle traps like AJ's from Buster's Bees at a Tara Beekeepers meeting, but I couldn't find them today.

I opened the smallest hive and there were SHB EVERYWHERE on the top cover and in the corners.  I didn't see the SHB in the actual hive, which was comforting.  First I used a funny suction instrument that John Jones gave me.  I tried....I really did, but I only sucked one SHB all the way into the bottle.  The rest were in the suction tube and I had no idea how to manage them.  So I gave up on the method and installed the AJ's. 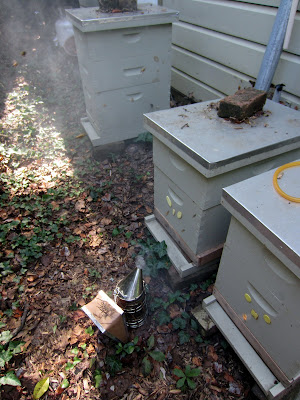 The good news is that the larger hive (fartherest away in the picture) felt heavy and when I opened it, there was not a single SHB.  In the smaller hive beside the smoker, were the tons of SHB - probably at least 150 on the top cover.

I left the hive with an oil filled AJs and we'll see if it catches any of them.  I also put a surround box with a rapid feeder filled with last year's honey on the small hive.


After that I went to Sebastian's to see if that hive needed food.  I opened it to find that ants had taken up residence: 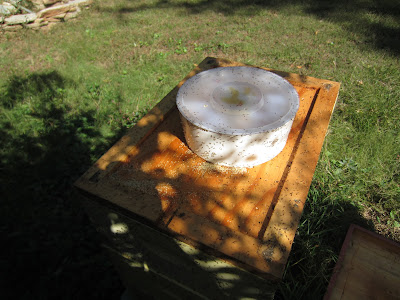 I wish you would LOOK at all the ants.  Funny thing, they weren't in the rapid feeder and there was still some crystallized honey in it.  I had two jars of last year's honey so I refilled the rapid feeder.

I think I'll go back and sprinkle cinnamon all over the inner cover.

At the bee club meeting this week, the president asked who wasn't feeding their bees.  I didn't know whether to raise my hand or not.  I'm not feeding mine in the way she meant - with sugar syrup.  I am feeding the ones that are light on stores with last year's honey.

After the bee meeting in Massachusetts, I want to raise bees that aren't dependent on my interference and don't need sugar syrup to make it through.  I also was scanty in my harvest this year to make sure that the bees are OK for the winter.