I belong to a couple of bee clubs.  The Tara Bee Club is having its honey contest tonight.  I have to work until 6:30 and I live 16 miles in going home traffic from the Tara meeting in Forest Park, Georgia.  They are accepting honey entries from 6:45 - 7:15 so I will arrive at best just under the wire.  As a result I had to get everything ready last night so that I only have to take the plastic wrap off of the jars, put on new tops, and hand them to the steward.

Generally to a honey show, I take a leg of panty hose or a piece of silk for polishing, gloves to pick up the jars, a flashlight to look for fingerprints, a squirt jar of water in case something needs cleaning, toothpicks for last minute bubble removal, silver demitasse spoons for equalizing jar fills, and lint free cloths for polishing jars.  I'll probably have all of that with me, but in reality, I won't have time tonight.  So last night I spent hours getting my entries ready for the show.

I poured two wax blocks and crossed my fingers until this morning.

I polished, equalized, and de-bubbled jars (actually only one jar had bubbles).  I put new tops for each jar in plastic Ziplocs.  I put all the finished products in a sectioned box: 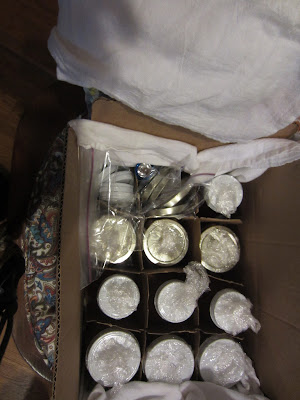 So I'm entering (from top of photo to bottom) black jar, creamed honey, light honey, chunk honey (and a wax block - see next post).  You can see the flashlight peeking out of one of the jar lid filled sections and the new tops for the jars in their baggies.

We'll see if anything places - I've not done great in honey shows this year, but if I say so myself, the creamed honey we are entering into Tara is really fabulous.
Email ThisBlogThis!Share to TwitterShare to FacebookShare to Pinterest
at 10:36 AM
Labels: creamed honey, honey contest, preparing for a honey show