Yet Another (two) Wax Block(s)

Well, I'm at it again:  The Great Wax Block Saga.

Last night I poured two wax blocks for the Tara Contest and hoped at least one of them would be good this morning.  When I got ready to pour, I pulled out my piece of silk and found that a wax moth or some other creature had feasted on it: 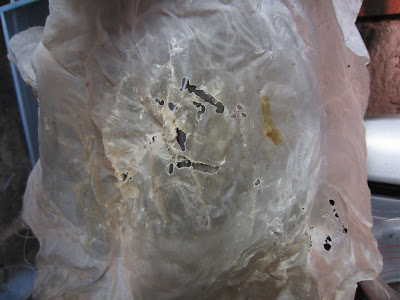 So I resorted to using panty hose - not as good a filter, but hey, it's what I had. 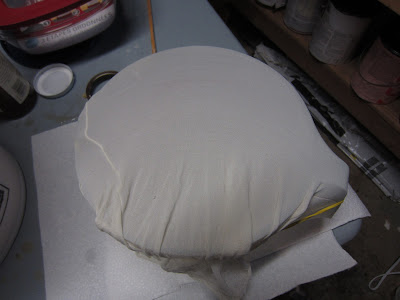 The panty hose is stretched over a measuring cup with a pouring lip that has been heated in a pan of simmering water so the wax won't solidify as it hits the glass.

I cooled one block in the downstairs oven and the other on the counter top.  I heated the oven to its lowest temperature:  170 and then turned it off before putting in the wax.  Inside the oven while it is heating is a roasting pan filled with hot water and the mold for the block: 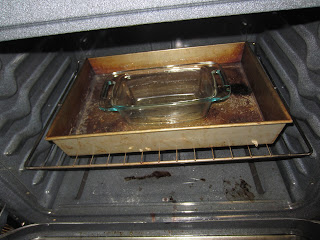 I poured one round mold and one in a bread pan.   This morning both were good, but the bread pan had striated lines on the edges of the block: 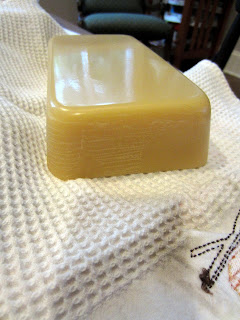 I polished it while I put the round mold in the freezer - it wouldn't come out of the mold and sometimes the freezer for about 30 minutes will do the trick.  As a last resort, I could use this block but I don't want the striations.

Voila!  The round mold came out just lovely: 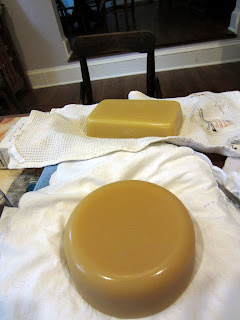 I can see a couple of specks in it - result of the use of panty hose instead of silk, but it is a gorgeous wax block.  I've packed it up (after polishing and polishing with panty hose) to go to the show tonight as well. 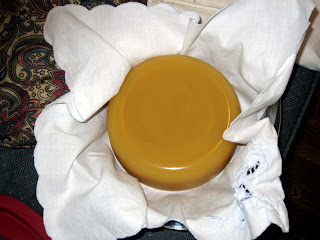 It rides in its own Tupperware container and sits on a linen napkin - throne for a queen, I guess.

Wish me luck and I'll let you know how it goes.

Email ThisBlogThis!Share to TwitterShare to FacebookShare to Pinterest
at 10:51 AM
Labels: honey contest, pouring a wax block, preparing for a honey show, wax block