Most of the time when something goes wrong in a hive, I'm quite clear that I've made an error (and anyone who has been following this blog knows that I have made many)

Every once in a while I'm not totally responsible for the bee messes that can happen in my hives.  Last Sunday and Monday I installed two packages - one in my own backyard and one at the Chastain Conservancy.  Generally the beekeeper would go back into the hive in about 3 - 5 days to see if the queen has been released from the queen cage.

However, both we've had bad weather ever since and (good news for me) my office practice has been very busy so I haven't had any free bee-ing hours during the few times when it was warm enough to open a hive.  Over the weekend our highs were in the 40s and it was pouring rain on Saturday as well as cold.  We can't get into the Chastain apiary on Sundays.

So now it's Monday - one week from installation - and I have not opened either hive to see if the queens were released.  Hopefully they each were and all is well, but you never know.  The temperature is going to be in the freezing range, really until Friday, so the chance of opening the hives is slim.

So here are the various scenarios:  The queen has been released and the hive is functioning with an empty queen cage in the hive.  That shouldn't be a problem at my home hive because I wedged the queen cage between frames: 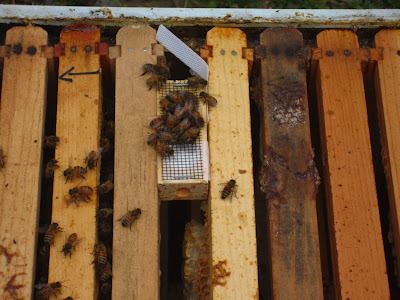 But at Chastain, I set the queen cage on the bottom bar of a frame (one of the advantages of using foundationless frames).  There if she has been released, the queen cage is in the way and they may have built crooked comb around the cage, throwing off the symmetry of their comb building: 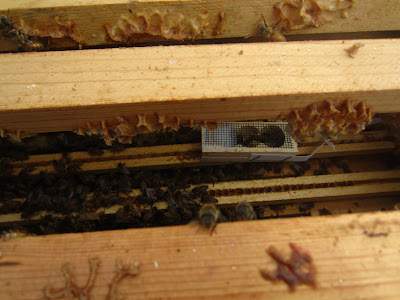 It won't be in the 60s until Friday and I'll be out of town, but Julia will open the Chastain hive that day and remove the queen cage and check to make sure she was released, but I won't be able to do a thing between now and then because of the weather.

Atlanta has the strangest weather.  We don't have winter until March and now it's the week after the first day of spring and we are having the coldest week since March of last year.
Email ThisBlogThis!Share to TwitterShare to FacebookShare to Pinterest
at 9:08 AM
Labels: Installing bees, package bees, queen cage