The Impending Death of a Queen

This morning it's finally both warm and I'm in town AND I am off on Monday mornings, so Hive Inspection time.  I was very anxious to get into the drone layer hive and see what's going on.

I got out to the backyard to find that the bees in the Drone Layer hive were carrying out the bodies of drones, ripped out of their cells: 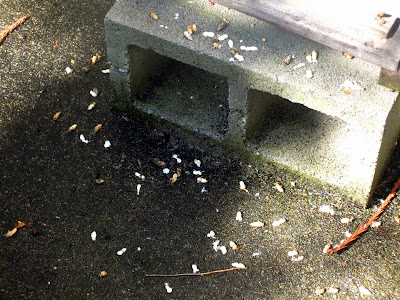 So now I'm thinking something is going on and the drones are either ill or perhaps they have a new hygienic queen.

I wanted to open the hive, but when I took the top off, I found a ton of hive beetles.  Those of you who have heard/seen my hive inspection talk/slideshow (on right sidebar under Pages), know that my cure for the small hive beetle is SMASH THEM WITH YOUR HIVE TOOL.  So that's what I did.  The first photo shows the shiny little !!#$!@#$ and the second shows the smashed dead bodies. 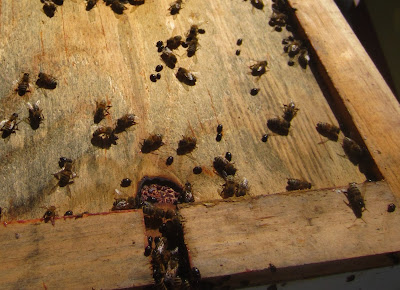 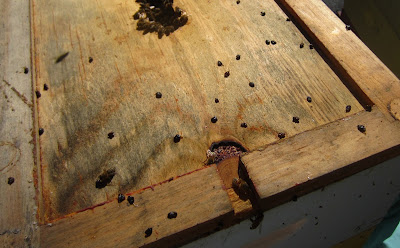 But then I opened the hive.  I started in the bottom box where there was pollen stored but no brood.  The last time I was in the hive, I saw (or thought I saw) eggs in the bottom box.  I worked my way up.

In the second box, I found the old queen.  She had a yellow dot on her thorax which means she is the original queen from the hive that was purchased as a nuc last year.  The yellow dot means she is a 2012 queen (yellow is the color for years ending in a "2") - the drone cells mean that she was indeed "short bred" and did not get mated well enough to justify selling her with the nuc that I bought.

The bees do not like her and are setting her up for her impending death.  I'm putting up several photos of her so you can see that they have chewed her wings.  I think they are about to push her out of the hive and with her wings destroyed, she will die.  I don't think they would do this or pull out the drone brood if they didn't have a new queen. 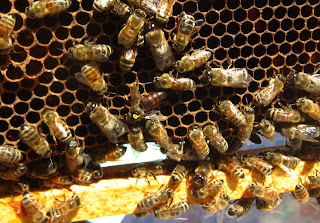 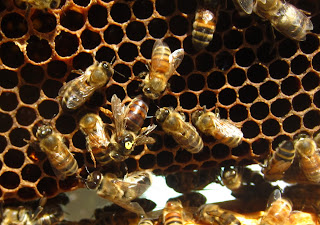 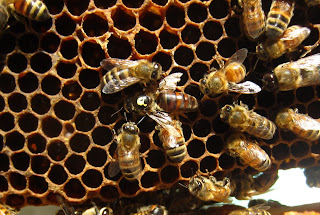 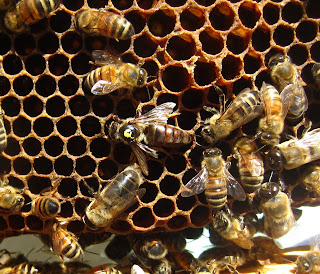 I know it's a lot of photos, but I thought this was fascinating....the impending murder of the queen....and it's by slow torture.  First they chew the wings, then they will cast her out to die in the elements - and she has been taken care of all her life.  What thanks does she get???

There was no brood in the hive.  But I found an opened queen cell, probably made from the frame that I put in the hive from Morningside.  So I think they have a new queen who is either out getting mated or is back from getting mated and isn't quite ready to start laying. 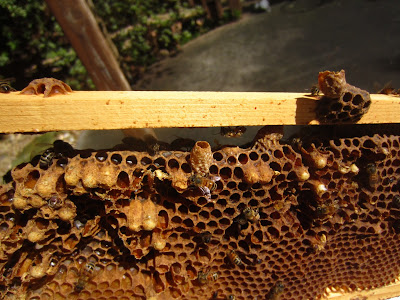 Since there was no worker brood, just for safety's sake, about 30 minutes after I closed up the hive the first time, I opened it up again and I added another frame of eggs into the hive from Morningside .

I think this hive feels hopeful as a group.  There hasn't been a good queen for quite a while but there were still a ton of workers in the hive as well as drones.
Email ThisBlogThis!Share to TwitterShare to FacebookShare to Pinterest
at 9:30 PM
Labels: adding frame to queenless hive, carrying out brood, queen