Atlanta has strange weather.  In December and January, it's not very cold - I rarely get out my winter coat, but March - it's cold.  It's a week before the first day of spring and the nights are in the 20s and 30s.  However, this weekend the temperature is supposed to reach 72.  But all over Atlanta last week the bees were swarming, so I got worried about my 3 year old hives at my old house.

I drove up there on Saturday to check for swarm cells and make at least one split.  We do have drones in the hives - not yet in large numbers, but I am seeing them, so I thought I could make a split and then plan to split and move these hives on the 16th.  I need to sell the house and can't put it on the market with bee hives in the backyard!

I went through every frame in Colony Square and didn't find a single swarm cell.  I made a nuc from frames in the hive.  I did find good brood patterns and that the queen was filling in holes where brood had emerged with new eggs. 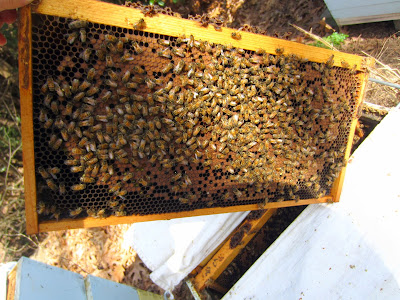 The hive was full of bees and seemed to be doing well.  I looked at every frame but the two under the board in the lower box.  This is an eight frame box hive sitting on a 10 frame deep.  I blocked the two outside frames with a board that is so well-propolized that I didn't even try to get it off.  Since there were no swarm cells (and I looked at every frame except those two), I'm thinking it will be fine until Saturday the 16th for Jeff and me to do splits.

Next I went through Lenox Pointe.  Again, no swarm cells 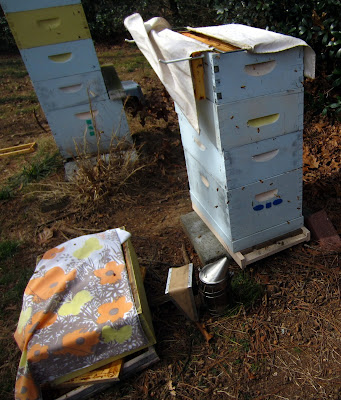 In Lenox Pointe I saw signs of a good queen at work.  Empty cells, each with a single egg or c-shaped larvae.  And then I saw the queen in the second box. 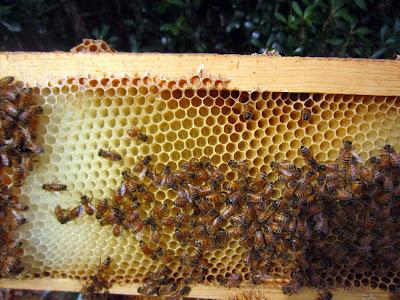 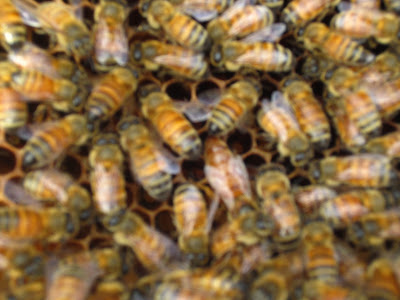 I realize it's a blurry photo, but at least she is distinctive and you can see she is there...right in the center.

In the bottom box, nothing much was happening.  When we split the hives on the 16th, I will leave this box off altogether, if I can, because I prefer to use all medium boxes.  If not, I'll make a nuc of deep frames from Colony Square and Lenox Pointe and see how they do. 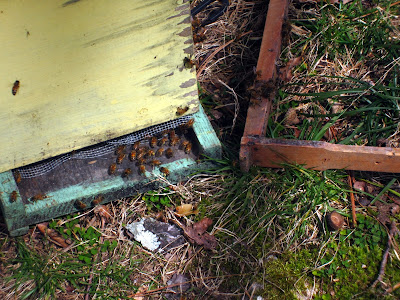 I had made a nuc from frames out of Colony Square so I closed it up rather clumsily with hardware cloth.  Note to self:  Next time staple the hardware cloth to the entry before putting it into the car to go visit the bees!  Because I hadn't closed the entry well, there were bees all over my back window, much to the consternation of the car behind me at a red light.

I took the nuc to install it at the Morningside Community Garden to replace the hive that had died over the winter.  The bees seemed happy there, but I am worried that I didn't shake enough bees into the nuc, as I always worry when I make a split. 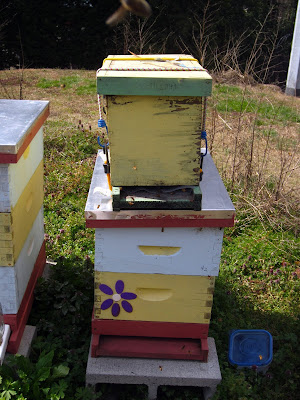 I then went into the survivor hive at Morningside that made it through the winter.  It had obviously emerged brood with the cells filled in with new eggs and larvae - great, hard working queen. 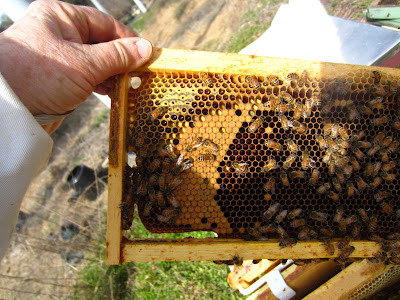 Although the camera doesn't let you see it, the space inside the curve where brood has obviously already emerged was filled with eggs.  I took a frame of brood and mostly eggs from this hive and put it into a pillow case to take it home to the drone laying hive.

At home the drone layer hive looked the same.....still three frames of drone brood.  I went all the way down to the bottom of this hive and found eggs in two of the bottom deep frames.  I have not yet seen the queen in this hive, but every cell I see with eggs has only one egg and it is standing upright, as it is supposed to.  I don't think I have a laying worker, but rather a poorly mated queen. 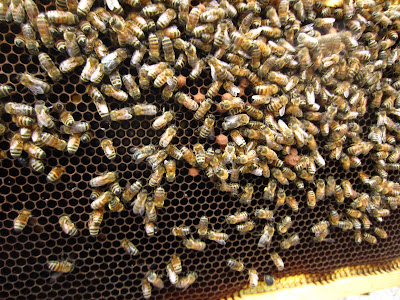 I added the frame of eggs from Morningside to this hive to give them the resources to replace their queen.  There are a lot of bees still in this hive, despite the queen not making replacement workers.

In this hive on the bottom I found in the deep a frame close to the side of the box that had fairly new wax in it.  In the cells were dead small hive beetles - not bees.  The SHB were crowded and face down in the honey cells just as a starving hive of bees might be.  I don't know how to explain it since the hive is alive and doing well. 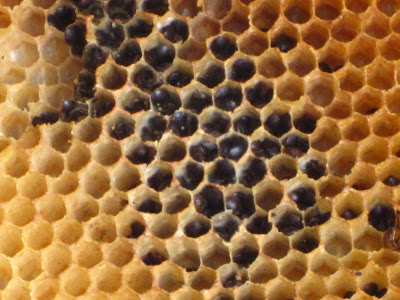 I made all of these photos last weekend and tomorrow is my move and split day.  Jeff and I are meeting to split the hives at my old house in the morning and we are moving the newly split hives at dark later in the day.  I will take one of the nucs to Rabun County to replace one of the hives there and will cross my fingers that the other hive is also there and alive.