Quite a Day of Bee-ing

Bees are such interesting bee-ings.  I never know what I will find when I open a hive - and the surprises keep it so interesting.

Jeff and I had big expectations for today.  Our plans were to split both hives at my old house and then move them to different locations.  I had ridiculous plans to do an even split of both hives and get a nuc out of both hives.

The bees had other plans.

We arrived at the house at 11, when the Atlanta Saturday was warm enough to be comfortable opening the hives.  I had had nightmares all night, remembering/dreaming about when we moved Topsy, the top bar hive, and in essence killed the hive with the huge mess we made.  Granted, these are all Langstroth hives, but I still was without confidence.

I called Noah on the way over and he suggested that I look at the experience as a reparative moment: instead of killing the hives, I would be saving them.  I tried to take that in but I was still nervous about the whole event.

Our plan was to do an even split a la Michael Bush's description.  We started with Lenox Pointe because we felt less sure of Colony Square, which has been Jeff's nemesis ever since he began this endeavor.  Jeff set two screened bottom boards at right angles to the hive: 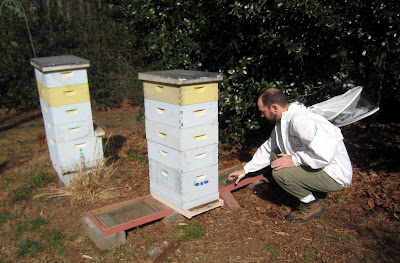 In an even split, you make sure each hive has a box of brood and eggs and each hive has resources - honey, pollen, etc.  With four boxes above the deep, we figured we could deal it like cards, as Michael suggests, and have two and two.  I had been in the hive the weekend before and knew they were not using the deep except for storing pollen.

We quickly found the queen just where I had found her the week before in the second box.  We immediately took that box off and it became the first box for one half of the split.  We marked it on the side of the box with a Q since the queen was there for sure. 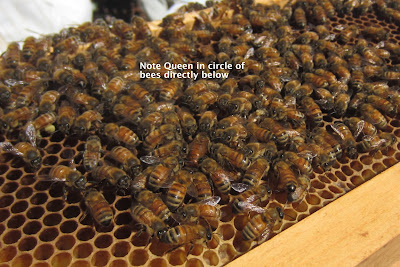 The box below that one (box #3, going down) had brood and eggs in it so it became the base for the second half of the split.  We sorted through the frames in the remaining two boxes, removing frames with crooked comb and too fat honey comb.  I'll harvest that honey (about three or four frames worth) and feed it to the package I'm getting tomorrow for Chastain.

Doing this type of project allows the beekeeper to make some helpful changes to the hive.  We removed all of the frames that were out of whack in terms of how the comb was built and replaced those frames with better ones.  One thing I've learned from foundationless beekeeping is that you can't give the bees a box of empty frames for honey with just one ladder in the center.  Instead, if the box will be used for honey, you need to checkerboard - one capped honey frame, one empty frame, one capped honey frame, one empty frame across the box.  This keeps the bees from making fat honeycomb and intruding on the frame beside it. 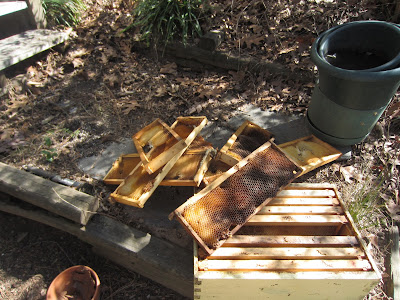 In the end we had two boxes of honey, pollen and empty frames to put on each of the boxes. 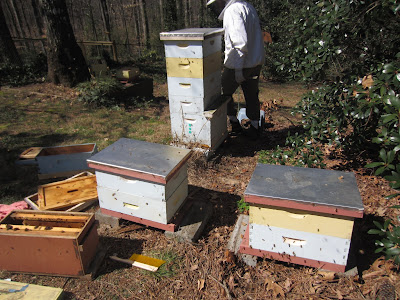 We felt so great about this split.  We knew we divided the resources well; we knew which half held the queen; and we followed our goal to the end.  BTW, we used a nuc as a quiet box, as per Billy Davis, throughout the removal of frames.  Jeff didn't get stung the whole day.  I got stung four times, but as he pointed out, I insist on not wearing gloves!

We noticed, however, that all the foragers were going back to the box where the queen was - pheromone influence and all of that.  So we decided to go ahead and move the hive with the queen in it rather than wait until evening.  We put it in my car - I have two eight frame size moving screens - fantastically helpful.  Then we put the queenless half of the split in the original hive location so the foragers would come back to it and left it at the house until evening. 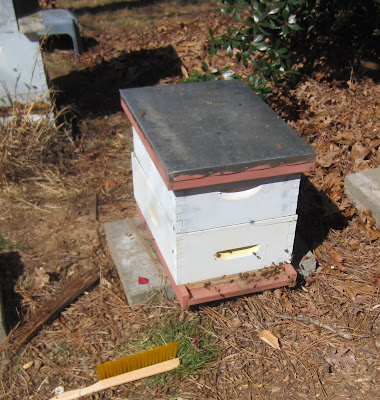 We called Sebastian and took the queenright half to his house to replace the hive lost going into winter. He and Christina were thrilled and Jeff and I felt good about solving this problem. 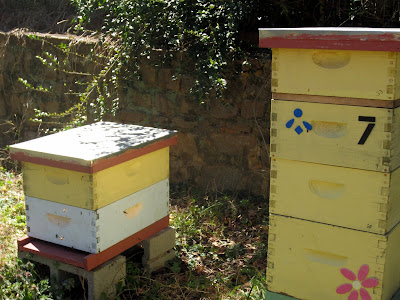 I'll write about the rest of the day tomorrow.  I know I have only told the smooth part of the story, but we'll get to the way the bees were surprising tomorrow.  We moved hives and I did bee things all day and I'm exhausted.  More on St. Paddy's day.
Email ThisBlogThis!Share to TwitterShare to FacebookShare to Pinterest
at 11:14 PM
Labels: even split, Michael Bush, moving hive, moving screen