The Rest of the Splitting Story

After we did our lovely split of Lenox Pointe, it was time to open Colony Square.  The week before on Saturday, I had opened the hive to find eggs - enough that I made a nuc and took it to Morningside Community Garden.  However on this day when we opened the hive, we couldn't find a single egg.  It was mid morning and sunny, so we should have been able to see eggs if they were present.  We also never saw the queen.

I'm embarrassed to say that I didn't take any pictures of this phase of things - we were making decisions and struggling with this.  Of course we couldn't split a hive with no eggs - there would not be resources for the queenless hive to make a queen.  And indeed was there a queen in this hive?  We didn't know.

We finally found a frame with about three queen cells on it.  All of them were still open and had the workers upside down in the cell taking care of the larvae.  Would a hive swarm without leaving capped queen cells behind?  Maybe the queen cell that counted and was finished was hiding somewhere???

I think either the hive had swarmed without leaving queen cells finished (unlikely, right?) or they were planning to swarm and were stopping the queen from laying while they made queen cells.  In any event since we only saw the one frame of queen cells, we decided that we would have to move this hive as a whole.  We were taking it to a man who lives behind a community garden in a neighborhood that abuts the Emory campus.  The bees will have not only the community garden, but the floral abundance in lovely Lullwater park on the Emory campus as their foraging ground.

What we decided to do was to put the two boxes of brood together and to put the two boxes of honey together with a bottom board and top as if two separate hives so that we could carry it together.  We left for the day and planned to come back in the evening to move the hives.  We strapped them up before we left and planned to close the entrance with #8 hardware cloth when we returned.

In the dark of night, we carried the queenless half of the Lenox split and the two halves of the Colony Square hive over to Ron's house in the Emory area. 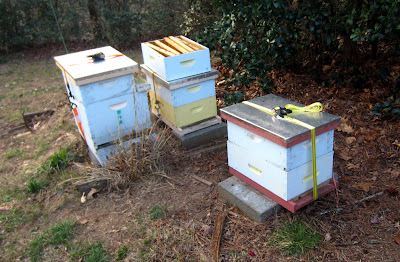 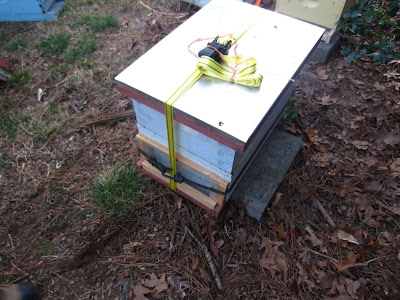 By the time we drove 30 minutes to the Emory area (Atlanta is really big, you know), it was dark.
We set the hives up in Ron's backyard - you can see the moving screen we used on one of the hives and the screened wire we used on the other: 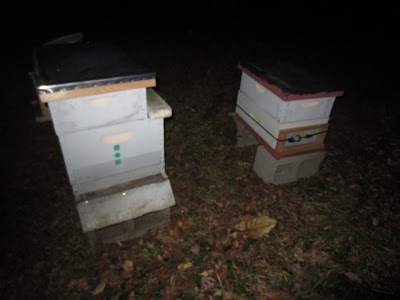 Our last move of the night was to take off the screens and leave the bees to settle into their new environs. 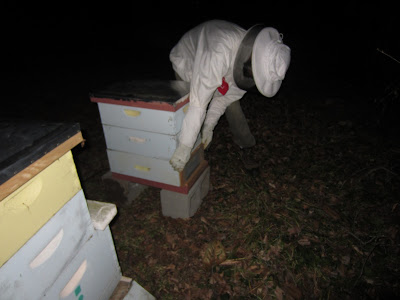 So optimistically I was hoping for at least four hives out of these two three year old hives.  Instead I got one even split and moved the other as a whole.  We even brought the deep box on Colony Square because it was full of brood.

I did see one tiny c-shaped larva in that deep, meaning the queen was laying about three days before.  That reassured me a little because one of my worries was that I had inadvertently put the queen in the nuc I had made the week before....not the case, as per the egg age in the old hive.
Email ThisBlogThis!Share to TwitterShare to FacebookShare to Pinterest
at 11:39 PM
Labels: moving at night, moving hive, moving screen, queen cells, splitting