On Thursday morning I checked on my backyard hives and was particularly interested in the nuc we are thinking of moving to Chastain as a teaching hive.  Julia gave me a queen cell on a frame for this nuc back on March 18.

As Billy Davis would say, the queen cell looked "medium biscuit" in color which means it was about midway through its development.  So I expected the queen to emerge within a week.  But I left the hive alone, except for giving it honey to eat in a Boardman feeder inside the hive.

On Thursday I opened the nuc to look at the work of the queen for the first time.  Notice the make-shift entrance reducer!  Jeff is making us some better ones.  I have had no confidence in my ability to make a nuc - have never done it successfully - but this year every one I have made is a success. 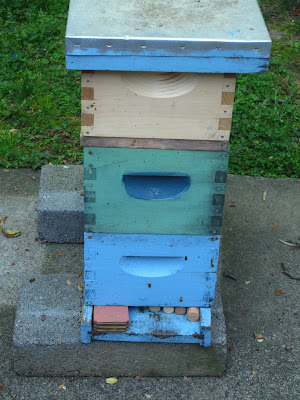 The queen was laying and so eager, that she was laying in barely drawn comb.  If you click to enlarge either photo below, you'll see an egg in every cell: 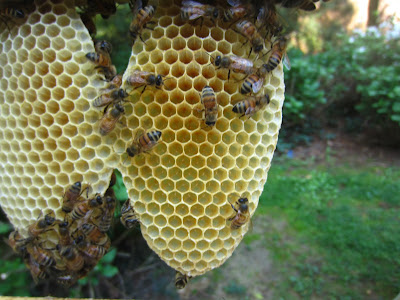 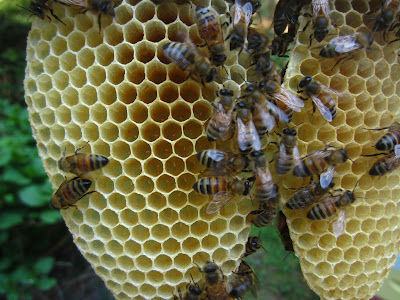 The nuc had eaten all of the honey I had provided in the Boardman Feeder, so when I was confident that the queen was there and doing well, I went inside to fill a jar from some honey I had crushed from a deadout.

I filled the jar and then, to my horror, dropped the jar and broke it to smithereens on the rug in my basement honey harvest area.  I took the broken jar and honey out to put it where the bees in my apiary could clean it up: 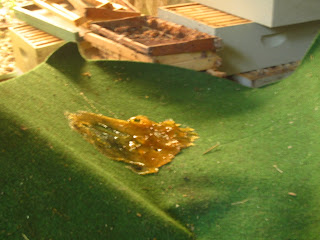 How I left it was how it looked above.  This afternoon (one day later) when I arrived home, this is what the rug looked like: 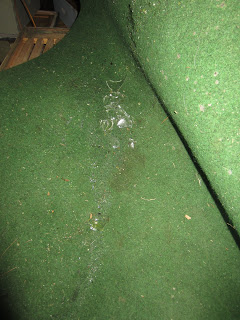 All the bees left was the glass!

Since on Thursday when the jar broke, I was leaving for Rabun County before I could crush any more of last year's honey, I gave the bees a jar of local, but commercial honey. 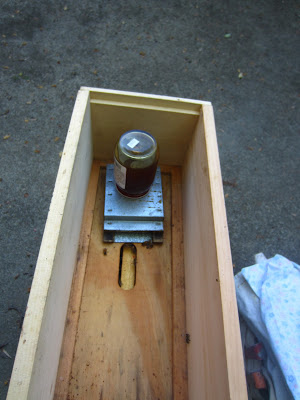 I'm embarrassed to be feeding them commercial honey, but I wanted you to see what it looks like to use the Boardman as an interior feeder in a nuc.

Depending on the weather, I'll either take this hive to Chastain on Monday or Tuesday morning.  I'll also take a frame of brood and eggs to put into the drone layer hive now over there to help the bees begin to address their ineffective queen problem.