The Small Swarm is No More

I opened the small swarm hive today to combine it with Proteus Bee (both queenless). The hive was full of bees - I couldn't tell if they were robbers who just never went back home or if they were the bees who lived there.

The frames that were not honey-robbed frames were full of wax moth worms and wax moth damage. I removed all of those frames from the box.

In the top of Proteus Bee, there is an unopened queen cell, no brood and some bees. In the bottom of Proteus Bee there were a few bees and frames with wax moth damage. I removed those frames.

Then I went to Bermuda (strong queen, great source of brood frames). I took three frames - one beautiful brood pattern, one with lots of new larvae and eggs, and a third with capped brood. I put two of those frames in the top of Proteus Bee and one in the bottom. I then put the two boxes together with newspaper in between them. I cut a couple of slits in the newspaper to facilitate the combination.

Next step is to order a queen.

The bricks in the last picture are where the Small Swarm Hive once stood. Perhaps there will be bees for it next year. Meanwhile I took the hive apart and leaned all the parts against a tree. I'll wash them out thoroughly with a hose before I use them again. 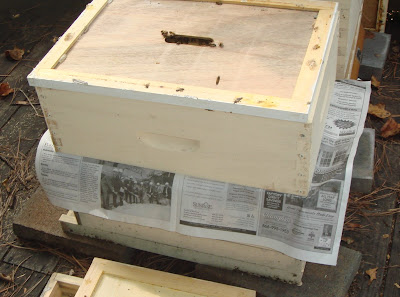 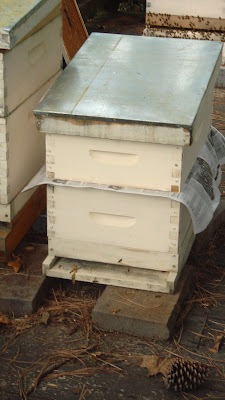 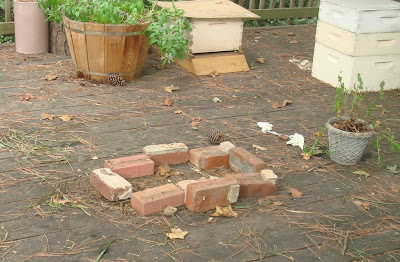